Smith Pond Shaker Forest has five miles of trails, with two access points. You can start your hike from the trailhead parking on Route 4A in Enfield or from the parking area on Smith Pond Road, via exit 15 on I-89. From the I-89 side, the trail is approximately 1.3 miles of fairly flat and easy hiking to the pond, and there is a 1.6-mile spur trail out to Half-Mile pond, located on the state-owned Henry Laramie Wildlife Management Area. From the 4A side, the trail climbs the wooded slope 2.5 miles. You can complete a full loop up to the pond and back, past all the shaker history, and two waterfalls – over 5 miles in total.

Public parking is located at 121 Smith Pond Road. Take Exit 15 from I-89, travel east, up the hill, on Smith Pond Road about .5 miles to the parking and trailhead kiosk.

Parking is also available off Route 4-A. Take Exit 17 from I-89, travel east on Route 4 1.7 miles toward Enfield, bear right onto Route 4A. The parking area and trailhead kiosk are about 4.1 miles on the right. 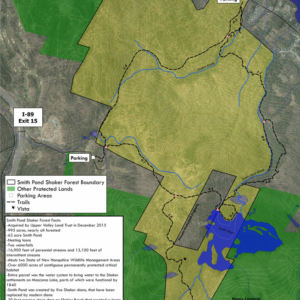 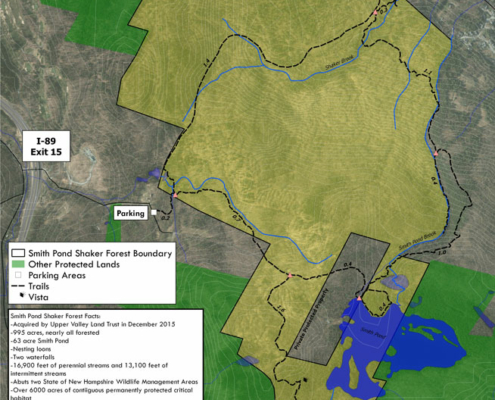 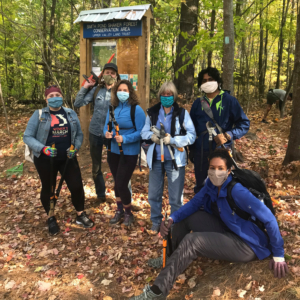 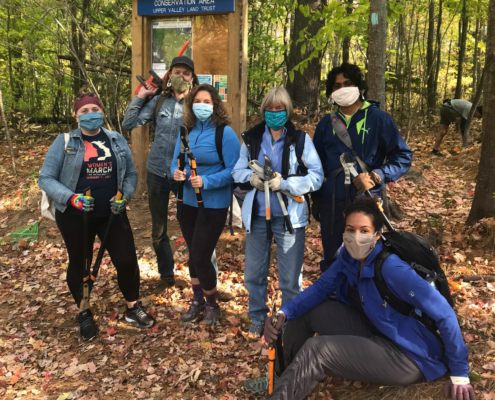 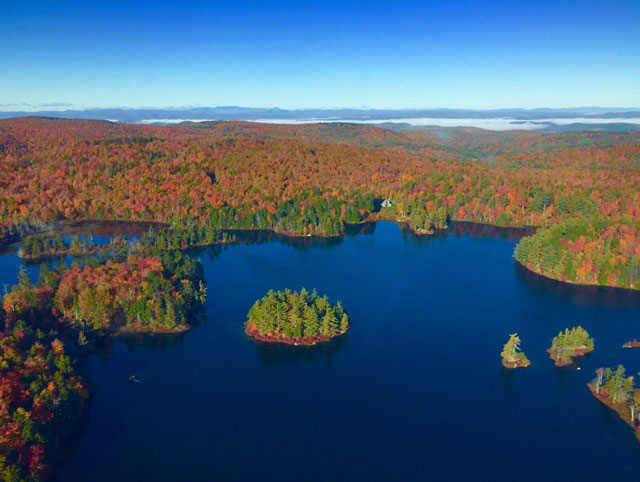 Fall Arial View of the Pond 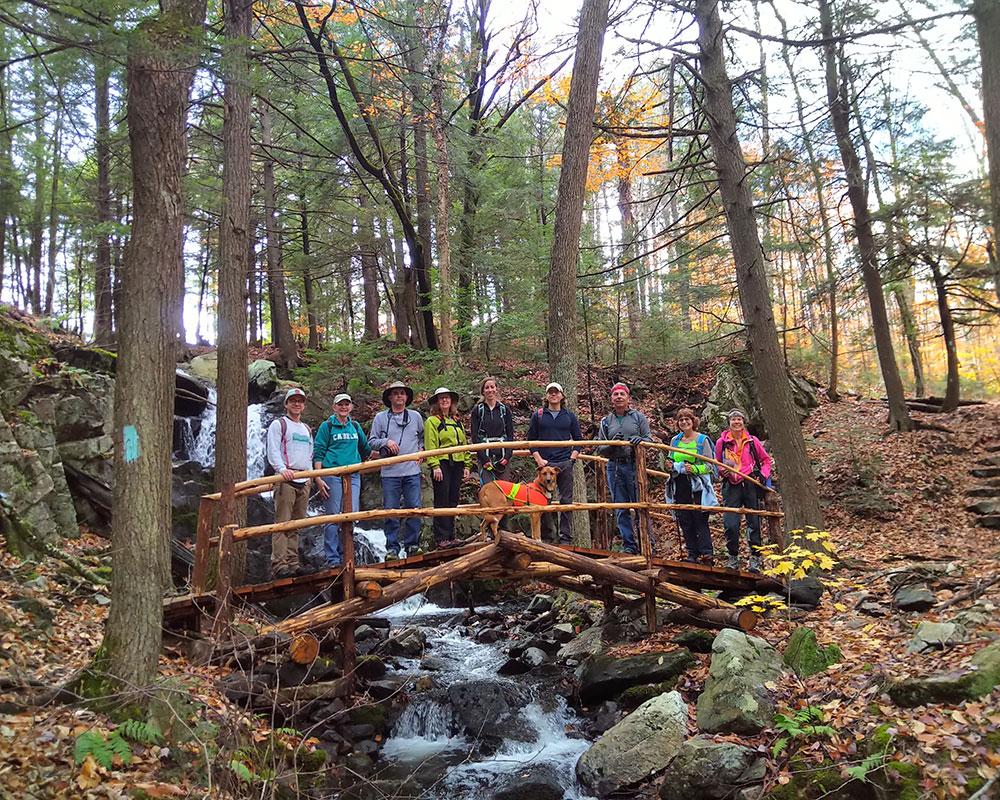 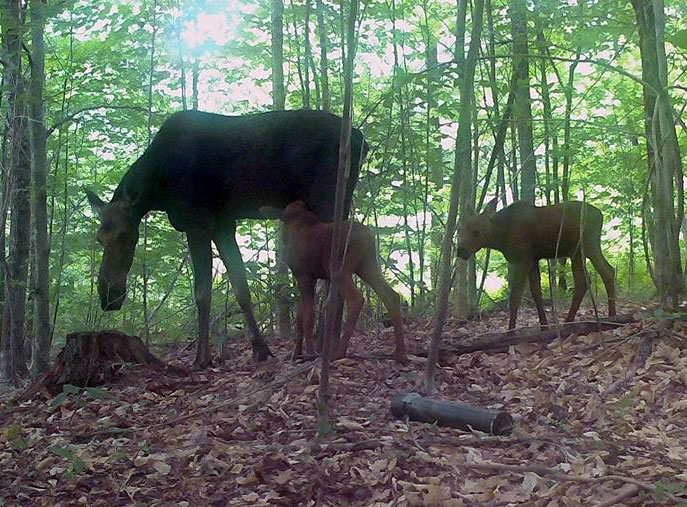 Moose on the Stealth Cam

Join UVLT’s Programs Director Alison Marchione for a video tour of the unique Shaker history of Smith Pond Shaker Forest. In this twenty minute video, Alison explores some of the fascinating historical artifacts along the beginning of the 4a trail including: stone walls, chestnut spillways, stone dams, canals, and reservoirs. She also sprinkles in some natural history facts about American Chestnut Trees, including finding on bearing fruit this fall.

The Smith Pond Shaker Forest History Tour is an annual event that is virtual this year. Watch the video and then take the walk yourself! All the areas in the video are less than one mile from the parking lot and easily accessible. 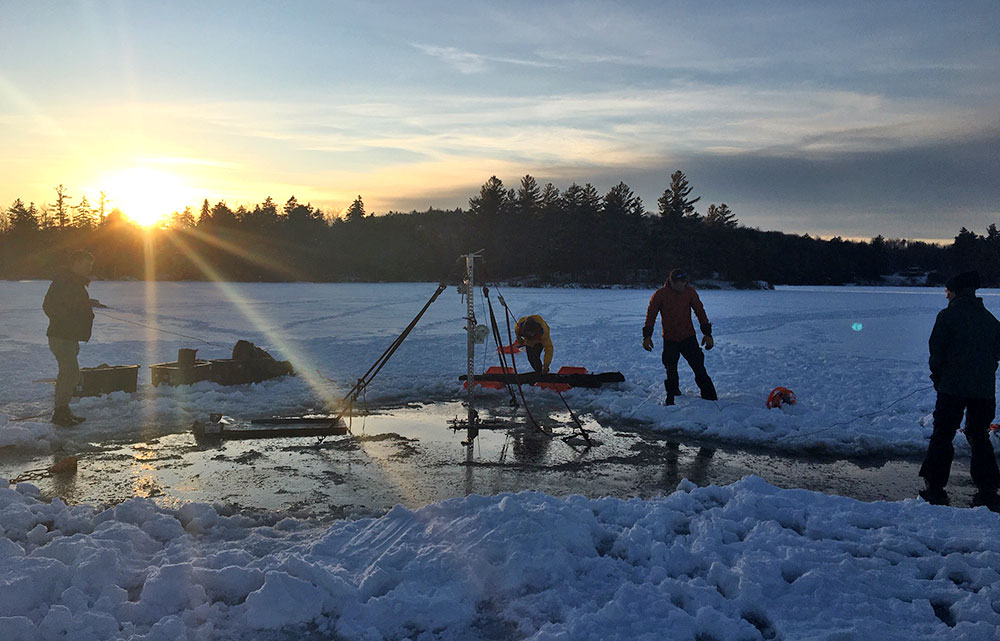 On January 22nd, several Dartmouth Professors took their classes out to Smith Pond Shaker Forest to learn about the geology of the area. Meredith Kelly, Associate Professor of Earth Science and her geology class drilled through the ice at the deepest point of the pond (10m) to take sediment cores. They hoped to reach sediments that had accumulated since the end of the last ice age – 14,000 years ago!

UVLT has found stump sprouts, saplings, seeds, pods, and mature chestnut trees at Smith Pond Shaker Forest Conservation Area. Before 1904, American Chestnuts were a common tree in North American forests. They grew rapidly and up to 100 ft tall. They were useful for their hardy and abundant nuts that could feed wildlife and livestock. Their wood is straight-grained, lightweight, and rot-resistant, making it well suited for fence posts, home and barn construction, and fine furniture.

Then in 1904 a fungal pathogen, commonly known as Chestnut Blight, was introduced from Asia to the US and spread rapidly through New England Forests. By 1940, most mature chestnut trees had been wiped out from this disease. The fungus enters the tree through damage to the bark and spreads to the underlying tissue, killing each layer as it moves through. The tissues can no longer transport water and nutrients throughout the tree from the roots and the tops of the trees begin to die. The fungus spreads through the air, infecting all of the nearby chestnut trees. The only mature American Chestnut trees left standing are those without another Chestnut within 10km.

Some chestnuts have survived by sending up stump sprouts that grow vigorously in disturbed sites, such as areas that have been logged. But eventually, these trees will also become infected with blight and die back. Very few trees will reach reproductive maturity. The Upper Valley is at the northern reaches of the American Chestnut tree’s range. It is also at the northern reaches of the fungus’s range and because of this, there are more healthy, unaffected trees in our area than anywhere else in the nation. 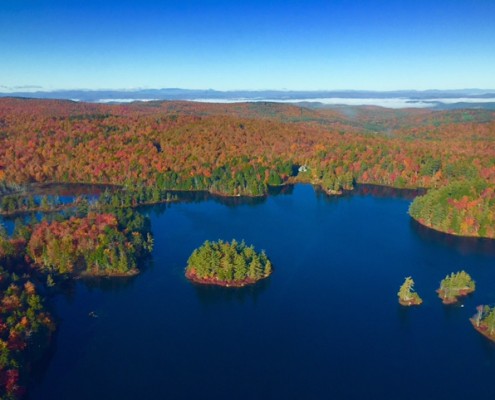