Over the past year, as UVLT celebrated its 25th anniversary, I spent some time considering the boldness of UVLTâ€™s founders, marveling at the confidence of their vision, remembering a time when land trusts were a new, untested idea. But vision is only half the storyâ€¦ it takes sustained effort, energy, and generosity to create an organization. The force that shaped UVLT from an idea into an institution came in the person of Lilla McLane-Bradley.

Lilla didnâ€™t do this single handedly of course. In fact, she attracted and mobilized others. Her enthusiasm was contagious. A person who responded to her request for advice was likely to receive a compliment in the form of an assignment. Very few people could say no to Lilla.

I first met Lilla in 1987. I was a new mother and newly returned to the Upper Valley, happy to be hired by UVLT for a part time bookkeeping and secretarial position. Lilla was in her mid 60â€™s, packing up her Occom Ridge home and preparing to move to Kendal, where she was one of the earliest residents. She would soon become the chair of UVLTâ€™s Board of Trustees, taking over from founder Donella Meadows.

I had recently helped my grandmother prepare for a move from her longtime home, and I expressed sympathy to Lilla regarding her upcoming relocation. She made it plain to me that she saw the change only in positive terms. â€œIâ€™ll be able to spend my time on the things I enjoy,â€ she said, â€œkeeping up a big house is just not what I want to do.â€ Instead, she poured herself into good works â€“ land conservation, affordable housing, womenâ€™s issues, mental health, philanthropy, education and politics. 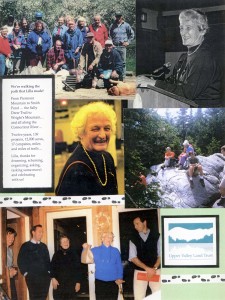 When Lilla retired from leading the Board of the Upper Valley Community Foundation she was given a scrapbook honoring her work with many non-profit organizations and causes. This was UVLTâ€™s page.

Lilla had a wellspring of optimism and energy that inspired and confounded her friends and colleagues. As Board chair, she called UVLTâ€™s office nearly daily, usually in the early morning, to share ideas that had come to her overnight. Her stream of consciousness formed a â€˜to do listâ€™ that would have been ridiculous for anyone but Lilla. She could simultaneously network, advocate, organize, fundraise, and perform any necessary volunteer function. She cheerfully set impossible goals, persuaded the rest of us that we could reach them, and then was delighted that we were able.

Lilla loved being outdoors and walked or skied every day she could. Living in town, she was passionate about the availability of trails and open space for all. As a UVLT Trustee, she insisted that every conservation project be evaluated in terms of appropriateness for public access. To this day, the â€œLilla questionâ€ endures as we review and select potential projects. With over a third of our 425 conserved properties containing trails or other access provisions, UVLT is recognized nationally for its recreation and conservation accomplishments.

During Lillaâ€™s tenure on the Board, UVLT established its endowment, began relationships with the New Hampshire Charitable Foundation and Vermont Community Foundation, and started a planned giving program. Lilla learned everything she could about land trusts, even travelling to national professional conferences. She embraced major projects in Hartford (Brookside Farm/Hazen Trail) and Norwich (Farrell Farm/Starlake Village) that required significant local fundraising. In our photos from those days, Lilla is usually in the center of the crowd. Sheâ€™s not holding forth â€“ that wasnâ€™t her style â€“ rather people are near her because she is fun to be with. The happiest face on every hike, raising her glass to toast someone else, or reaching across the table for another group of letters to sign, Lilla lived her life fully engaged.

Lillaâ€™s success as a fundraiser flowed naturally from her passion for life. She didnâ€™t select causes on the basis of their feasibility, she simply acted on what she knew was right. And asking for help was a logical consequence of caring, of seeing a need. She was dogged and she was fearless.

Lilla profoundly impacted many of the Upper Valley institutions and relationships that we take for granted today. In the 24 years I knew her, she ran circles around those of us a generation (or more) younger. She proved, without a doubt, that there is never an excuse for not trying, that â€œshowing upâ€ is what life is all about.

When I was hired to follow Tim Traver as UVLTâ€™s Executive Director, Lilla invited me to join her for drinks and dinner at Kendal. Over the course of several hours she introduced me to one friend after another. â€œWeâ€™ve just hired Jeanie to lead the Upper Valley Land Trust,â€ she would say, â€œand I am so excited.â€ I knew this blessing from Lilla was one more gift to UVLT. With her confidence behind us, nearly anything was possible â€“ and I was the luckiest of all.