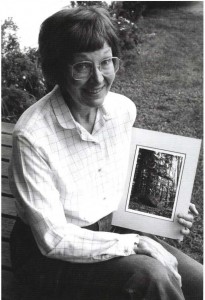 Laurel encouraged student Ryan Cilbrethâ€™s work to establish trails at Starr Hill & was glad her neighbors could enjoy the natural area. In 1991 at UVLTâ€™s fifth Annual Meeting, Laurelâ€™s leadership was honored & she was thanked with this photo of Ryan at Starr Hill.

The year was 1987, two years after the Upper Valley Land Trust was founded. In this year a conversation began that changed the shape of a city. Mrs. Laurel Letter of Lebanon came to the Upper Valley Land Trust on behalf of herself and her neighborhood. There was land owned by the city, sixteen acres, that was enjoyed immensely by Laurel and her community but she was concerned. There were undeveloped parcels bordering this land – would the communityâ€™s common ground become squeezed by encroaching development? This was important because this was a place that, in her mind, the people of the city needed.

For the next four years Mrs. Letter dedicated her time in countless ways to secure her neighborhoods special place. Finally, in 1991 Laurelâ€™s actions and dedication to the project paid off. That year, the Upper Valley Land Trust purchased two of the adjoining undeveloped parcels totaling 15.2 acres which it then conveyed to the City of Lebanon in the Starr Hill Conservation Easement. In 1991, Laurel Letterâ€™s dreams came true.

This past June 2011, the Lebanon Conservation Commission took another step by placing a conservation easement on one of the City-owned parcels that had originally inspired Laurels efforts. They also included another adjoining lot, bringing the total conserved acreage to nearly 40. In light of this addition, it is time to look back, and thank again, the woman who made it possible.

What has not been mentioned in Mrs. Letterâ€™s story is the personal sacrifice that she and husband Sid made to see the dream of protecting Starr Hill become a reality. For four years this vision was a priority to this woman, and she wasnâ€™t shy about it. She dedicated boundless hours to researching, map making, letter writing, meetings, and fundraising to make sure the conversation that she had started would continue.

By 1991, not only had 15.2 acres been acquired and conserved, but thanks to her work the City only paid half of what the land was valued. Laurel and Sid made a major contribution, raising half of the acquisition cost by taking out a second mortgage on their home. It was â€œa drastic stepâ€, Mrs. Letter admitted, drastic for folks of modest means but a step that she also saw as necessary to achieve the goal of conservation.

Laurel Letterâ€™s story can teach us all something about the power of the human spirit and the connection we have with nature. Her actions bring the statement â€˜home is where the heart isâ€™ to life. She put her heart into Starr Hill because it was home, not just to her but to her neighbors as well. Laurel believed in something bigger than herself and her dedication is a testament to the fact that the strength of oneâ€™s character is enough to achieve something great.

Thank you, Laurel, for inspiring us.

Land Soon to be Conserved in Lebanon! 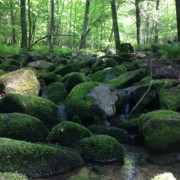