The UVLT Stewardship Staff has seen a lot of oddities over the years while monitoring conservation easements, but nothing could have prepared us for the unusual challenge that lay in store for us after Irene made its mark in our region.

Did you know that in addition to the 412 conservation easements held by UVLT in the Upper Valley, UVLT owns thirteen properties? One of those owned properties is a 23 acre island near the New Hampshire side of the Connecticut River in Claremont. Routine monitoring of the island shortly after the storm gave new meaning to the phrase â€œexpect the unexpectedâ€. We might have expected the 15 foot pile of logs, trees, boards, shrubs, fence posts, and other delectable floatables piled up on the upstream end of the island. We might also have expected the upper edges of the island to be torn away by a river gone wild. What we didnâ€™t expect to see – on the very top of that pile of logs and debris – was a 10 yard dumpster! Crazy you think? Thereâ€™s more! Nestled in beside the dumpster was a 188 gallon fuel tank that came from a farm somewhere up stream! Leaving one to ponder, â€œHuh? How did that happen?â€ 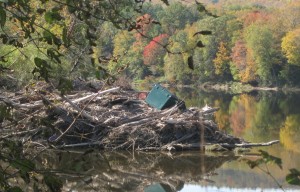 Well, we did a little bit of research on both the dumpster and the tank. The dumpster had a phone number on it so we tracked down the rightful owner. Upon hearing about the dumpster location, we heard a groan on the other end of the line but received acknowledgement that it was their responsibility to remove it from the island. The dumpster came from the West Lebanon shopping area, floating 23 miles downstream through Sumner Falls and ending up on UVLTâ€™s island. It is amazing to think of a dumpster floating one mile, never mind 23! 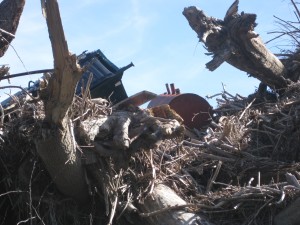 The dumpsterâ€™s companion was more problematic. No owner name, no identifying plates, and no one to take responsibility for the tank and the remaining fuel oil inside. After a conversation with the NH Department of Environmental Services, it appeared that since UVLT owned the property, we also â€œownedâ€ the tank, like it or not. We had to figure out what to do with Ireneâ€™s donation to UVLT so we put our minds to work.

Financially, UVLT is a very lean organization, particularly in this economy. We donâ€™t have the luxury of contingency funds or loose cash. But, we do have friends that care deeply about the river and the surrounding working landscape. And thanks to those friends, the tank was successfully removed from the island without spilling one drop of fuel.

How did we do it? 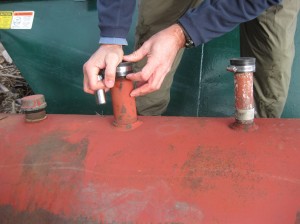 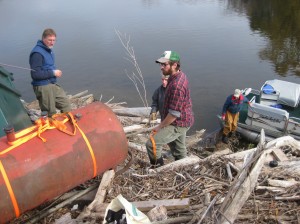 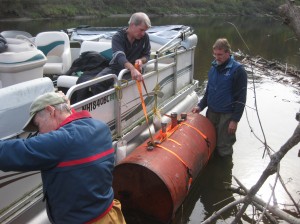 â€¢ UVLT staff contacted Claremont Fire Department which conducted on-river training and determined that the tank had about 15 gallons of fuel in it.
â€¢ UVLT staff made a reconnaissance run to the island and found: a log and debris pile that was slippery and inconsistent, but stable; a tank with two open vent pipes but appeared to be intact; and the closest shore consisting of a very mucky bottom with a steep slope up to the forested floodplain.
â€¢ Aerial photo review showed the closest river access point was Â¾ of a mile upstream.
â€¢ UVLT confirmed that the NH Dept of Environmental Services agreed to remove the oil from the tank if we got it to shore.
â€¢ UVLT contacted the Student Conservation Association (SCA) to recruit a couple of volunteers.
â€¢ UVLT called a trustee who owns a pontoon boat (!) and who had been known to say â€œIn life one must always do that which one has never done before when the opportunity arises!â€
â€¢ UVLT called a local farmer (and abutting UVLT landowner) to inquire about use of his tractor.

â€¢ On a grey October morning , at 28 degrees and warming, UVLT brought a boat, armed with pry bars, ropes, straps, rubber vent caps, come-a-longs, waders, hammers, wrenches, and some nervous laughter to the island.
â€¢ The vents were capped, the tank was freed, and it was slowly lowered to water where it was strapped to the side of the boat for slow trip upstream.
â€¢ At the boat ramp, the tank was plucked from the water by our local farmerâ€™s front end loader. 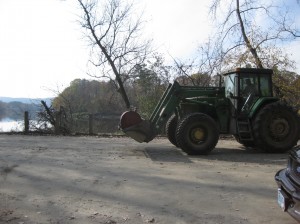 â€¢ Two days later, NH DES removed 15 gallons of kerosene and cut open the tank to remove sludge from the bottom.
â€¢ The tank was sent to the salvage yard and scrapped!

Huge thanks go to Lew Shelley and Josiah Downey from SCA; Gary LeClair, farmer and good guy extraordinaire; Ray Reimold, NHDES; Claremont Fire Dept; Rick Roesch, Captain and man of wise words; and all the UVLT staff who have to watch the UVLT stewardship staff have all of the funâ€¦ 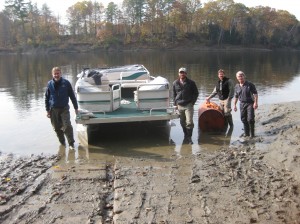