The Nature of Risk

In 1997, when Jim and I decided to buy a dilapidated former summer camp in Orange, New Hampshire, we didnâ€™t fully understand the risks involved. The main farmhouse hadnâ€™t been lived in year-round in nearly a hundred years. The couple that had run a sleep-away camp there for 35 years had left sagging sheds, a rotted-through gazebo, an overgrown clay tennis court, yards and yards of definitely not-to-code underground wiring, and the only sandy beach on a 29-acre trout pond. The property sat at 1,500 feet along a dirt road, miles from pavement and civilization. Weâ€™d been married less than two years. We were about to start a family. 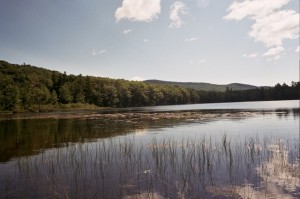 Friends and relatives tried to talk us out of the purchase, telling us weâ€™d be isolated, and that if we had kids weâ€™d end up spending all of our days driving. Plus, there was all that work to be done. But from the sandy beach we could see the fire tower and gray granite summit of Mt. Cardigan. A long ridge fell off the mountainâ€™s south flank, drawing a forested line halfway up our horizon, all of it state park. We couldnâ€™t see any other houses, partly because only two others, set well back, shared the pondâ€™s shoreline. Most of the camp property, more than 100 acres, stretched behind the farmhouse, away from the pond. Much had been heavily logged, but an old camp trail led uphill to a lookout above rocky cliffs, and springs flowed downhill through mossy swales to become streams. The sun rose over Cardiganâ€™s ridge to the houseâ€™s east, and set below our high bench to the west. 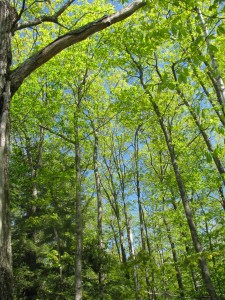 Ours, because, of course, we bought the place. We ignored our friendsâ€™ wise advice in favor of a daily sweep of sun, that long ridgeline, the chance to look out over water, and steep wild land. Fourteen years, two children, and thousands of car miles later, weâ€™ve come to see the costs of our choice. But weâ€™ve also learned how right our feelings were.

It made sense to us when we learned several years ago that our property sat in the middle of land considered â€œecologically significantâ€ by natural resource scientists. Weâ€™d seen moose, bobcat, fisher cats, black bears, foxes, and flocks of wild turkey. Coyotes, we were told, denned in the cliffs below the lookout. Two seasons ago, loons nested in a wedge of grasses that juts out from an adjacent wetland; eagles and herons nested in the swamp below the pond. In late winter, otters slid from ice into open water; in the spring they feasted on trout.

But just as we confirmed our sense that the landscape we lived in was extraordinary, we learned that it was fragile, too. Our closest neighbors, friends of the old camp owners, had used the farmhouse up the road as a summer home for half a century. In declining health, they subdivided their 330 acres and sold off lots. Plans showed a quarter-mile-long road crossing the wetlands near the loon nest. A proposed house site sat right where we often saw otters enter the pond. 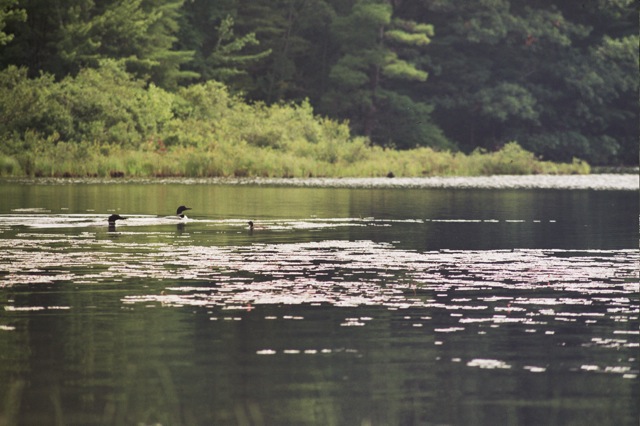 Loon family on the pond.

Eventually the shoreline lot was rejected by wetland regulations and new, conservation-minded owners bought the farmhouse and began renovating it. But the close call motivated us to do what we could to protect this special place.

The townâ€™s conservation commission, newly constituted, had recently sent residents of Orange a letter outlining the benefits of conservation easements. It mentioned the Upper Valley Land Trust. We contacted the Trust, and Peter Helm came out for an initial site visit. He was excited about the ecological diversity he saw, and we grew more excited by the idea of protecting our land. The UVLT board approved the project, which would be the organizationâ€™s first in Orange.

Even then, we didnâ€™t move quickly. Amber Boland and Sara Cavin came out for follow-up visits, and established a homestead exclusion zone, but we dragged our feet, not yet willing to pay the few thousand dollars that our easement would cost. UVLT researched grant opportunities, but none that could be applied to our property were available.Â  Then late last fall, UVLT found donors willing to help. We quickly worked together to finalize the various nitty-gritty details. The title searches, easement language, boundary inspection, baseline report, final mapping, etc. were all completed in a flurry by the end of January. 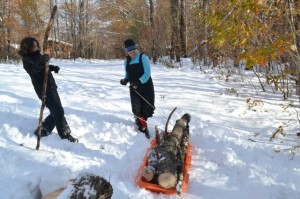 Gathering firewood from the wilds of our property.

We are living in an extraordinarily wild and beautiful place. Weâ€™d like our children, their children, and children who arenâ€™t related to us to have the chance to see the same undisturbed shoreline across the pond, swim in the same clear water, and have the same lucky interactions with natureâ€™s other creatures large and small. To develop a deep appreciation for this planet, and through that, a greater sense of stewardship.

Weâ€™re a bit wiser now. No one ever knows all the risks involved in any decision â€” in buying property, in having children, in our collective choices about environmental issues. But I would say that weâ€™ve learned to trust our love for this place. We knew there were risks of signing over development rights to this land â€œforever.â€ But all around us â€” around the Upper Valley, around the country â€” weâ€™ve come to see the risks of doing nothing. This is but a small piece of land in a large, inter-connected world. There is much, much more we can do.