Last Saturday was the last day of the 2013 Upper Valley Naturalist Training, coordinated this year by the Upper Valley Land Trust and hosted by Hulbert Outdoor Center. Â Once our class time was over the trainees and I sat discussing the training and what we had liked best or been most surprised by. One of the trainees said, â€œI was actually thinking about skipping the geology session because I couldnâ€™t imagine that rocks could be so interesting. But I was completely fascinated! The speaker (W. Brian Dade) was so passionate and so engaging I was shocked by how much there was to learn.â€ And so it is for almost every topic covered during the training. It seems that once you start looking, an entire world opens up before you. It is staggering how much there is going on right in front of us that we arenâ€™t aware of. There is so much to learn!

For example, were you aware that there are meadow voles in the Upper Valley? Yes? Well, did you know that they have just a three-week gestation period, and the females give birth to their first babies just weeks after being born themselves? Assuming zero mortality, after one year youâ€™d be able to sew together their pelts and make a quilt that would cover North America. Of course, there is mortality, and lots of it. As we learned from Ted Levin, everything eats meadow voles.

After a climb to the top of Lyme Hill with Tii McLane, she asked us to look up to the tops of the beech trees surrounding us. We noticed nest-like clumps of dead leaves and broken off twigs sitting among the branches. Some of us started to guess what kind of bird could make a nest like that. It turned out to be no bird at all. These were bear â€œnests,â€ left behind after bears climbed the trees and sat perched in their branches eating nuts all day in preparation for winter sometime last fall. 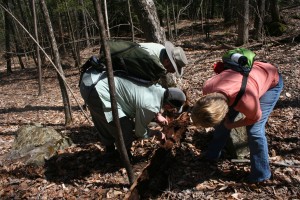 During the field session on wetlands, Craig Layne, our presenter, looked into a magnifying jar held by one of the trainees to see what she had found. For about the tenth time that day, he exclaimed, â€œOoh! Oh!â€ She had found two fairy shrimp, extremely short-lived invertebrates found in vernal pools for only one or two weeks a year. They are tiny, delicate and beautiful creatures with large black eyes. Seeing them was quite possibly a once in a lifetime experience for some of us.

Did you know that Vermontâ€™s rich garden soil is so rich because of marine deposits? â€œWhat?â€ you ask, â€œBut Vermont is nowhere near the coast!â€ Not now, but 450 million years ago, before life had even emerged onto land, Vermont was covered in intertidal mudflats which later became limestone and mudstone bedrock. Now, gardeners and farmers reap the benefits when they plant in the limy, rich soils that remain as relics of an ancient world. And this is just a tiny (and oversimplified) part of the surprisingly complex geologic history of the Upper Valley. Brett Engstrom explained that this rich soil also contributes to Vermontâ€™s diversity of forest habitats, as evidenced by plant species that indicate rich soil, such as the strikingly lovely and aptly named maidenhair fern. 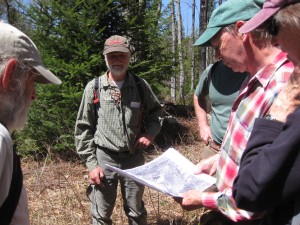 Stepping outside my front door this morning, I heard a chestnut-sided warbler. I couldnâ€™t help but say the mnemonic device (used to help remember and identify bird calls), â€œPleased, pleased, pleased to meet ya!â€ aloud to myself. I never could have recognized the song of this pretty little bird a month ago, but now I hear it everywhere, along with the other fifty-seven species of birds we identified by song and through binoculars last Saturday, with Bill Shepard as our fearless (and cartoonish) leader. As one of the trainees said, â€œI donâ€™t think you could have found anyone more enthusiasticâ€¦Iâ€™m sure I will be paying a lot more attention to the birds around my house now!â€ Me too.

Here in the Upper Valley, nature is always close-by, but so much of it we never notice, even when it is right there in front of us. To the fairy shrimp, maidenhair fern, limestone bedrock, meadow vole, bear â€œnest,â€ and chestnut-sided warbler I say, â€œPleased to meet you, too.â€ And to this yearâ€™s training graduates, twelve in all, I bid a fond farewellâ€¦for now. I hope to see them all out there again soon.