Longtime friend, former UVLT Trustee and conservation easement donor Doug Wise was honored by the Hanover Area Chamber of Commerce earlier this month. At the Chamber’s annual Leadership Awards banquet, UVLT President Jeanie McIntyre presented Doug with the Chamber’s Achievement Award, which celebrates an area resident who has made outstanding contributions to the community through an active leadership or individual effortsÂ in civic and charitable activities. This is what Jeanie had to say about Doug:

“Some people donâ€™t need an introduction.Â Usually thatâ€™s because the character, exploits and accomplishments of the subject person are so well reknowned that no description is necessary. Which is undoubtedly the case with Doug Wise.

But thereâ€™s another reason why an introduction seems unneeded orâ€¦ well, inappropriate. An introduction, by its nature, expresses the status quo. Selected facts from the personâ€™s history are pulled together in a summary of the moment, an expression of who a person is/has been.Â However, Â Doug Wise doesnâ€™t stand still, so looking backward to describe him just wonâ€™t do.Â

Dougâ€™s positive energy and inquisitiveness are absolutely transformative. For instance, fifteen years ago when Doug and I served on the Chamber Board together, Doug urged us to create, nurture and celebrate relationships that strengthen the vitality of local and regional commerce, cultural activity, and our communityâ€™s sense of place. This gathering tonight has its roots in that vision, and the Hanover Area Chamber of Commerce is infinitely stronger, more dynamic, creative and inclusive for it.

There are dozens of Upper Valley organizations and businesses that are different because of Doug, hundreds of people who have been inspired and challenged and helped. Even those who havenâ€™t had the good fortune to work directly with Doug have benefited from the environment he shapes â€“ a place where partnerships flourish, individuals and institutions reach for their stars, wordplay and imagery thrive and collide in unexpected ways. Heâ€™s purposeful and joyful. From Tokyo to Grantham, Coca Cola to King Arthur Flour, Doug has made it fun to think forward, to find and make a future that works. 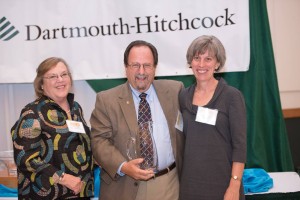 Several years ago, Doug and Joanne conserved their property in Lyme where thereâ€™s a little pond that offers natural beauty and welcomes neighborhood kids to catch frogs. It shouldnâ€™t be a surprise that when we asked for the name by which this conserved land should be known forever, they chose, â€œWisdom Pond.â€