Willis and Tina Wood have donated a conservation easement protecting the 150-acre farm where they make cider and jelly, raise lamb and produce maple syrup. The Wood family has cared for this land, and it has supported them, through eight generations. The products of their 133-year-old business are on the shelves of local stores and shipped around the world. 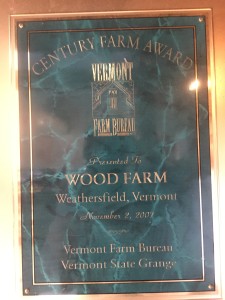 The Wood Farm property can be traced back to a farm of approximately 35 acres originally owned and operated by Joshua Aldrich in 1798.Â  The farm operation grew, and diversified, over the years to include sheep, cattle, an apple orchard, maple sugaring, a cider mill, and dairy.Â  Today, Woodâ€™s cider mill produces anywhere from 6 to 32 tons of cider jelly and boiled cider and from 10,000 to 52,000 gallons of cider annually depending on the quality of the apples in a given year, using the farmâ€™s cider press from 1882.Â Cider jelly is an old-time pantry staple that not many farms make any more, explained Tina Wood. But cider jelly was 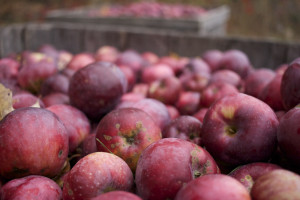 common throughout the 1800’s. The pectin elements in apples cause a natural jelling process when boiled. When mass production of jams and jellies took hold 100 years ago, small-scale cider jelly making became less common.Â The renaissance of locallyâ€“produced artisanal foods has brought renewed interest in cider jelly and boiled cider.

It was important to Willis and Tina that the farm remain intact for the future. Willis explained, â€œIâ€™m the sixth generation.Â  Maybe itâ€™ll be six more or maybe itâ€™ll be no more.Â  My daughter and grandchildren live across the street.Â  So, Iâ€™m hopeful that more generations will carry on. But if it doesnâ€™t work for them to continue on the farm I would still like the farm to continue as an entity.â€ 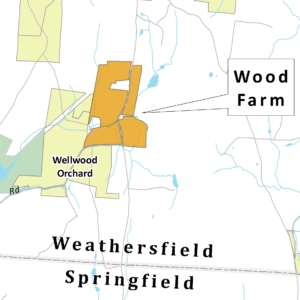 UVLT’s Peg Merrens Â says that the conservation of the Wood Farm is significant for meeting a number of strategic conservation priorities: The land includes 47 acres of important agricultural soil and a 19-acre sugarbush with over 1000 taps; there is more than a mile of frontage on perennial streams and four Class 2 wetland occurrences; a portion of the historic Crown Point Military Road runs through the property and there is more than a mile of frontage on the scenic Weathersfield Center Road. Adjoining the Wood Farm is 220-acre Wellwood Orchard, conserved by UVLT in 1997. Within two miles of the Wood Farm there are an additional 748 acres of UVLT-conserved property as well as over 1,475 acres of Federal and Municipal public lands including the North Springfield Reservoir and the Springfield Town Forest.Â  These conserved and public lands together support wildlife by limiting habitat fragmentation and protecting natural resources.

We’ve posted photos from a recent tour of the cider jelly-making here and learn more about the farm at their website.

Colleagues and Partners Join to Advocate for Housing and Conservation 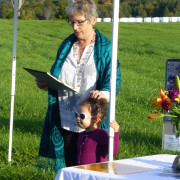 Matchmaking: Thank you from Jeanna