Brookmead Conservation Area is 352 acres of farm and forest land in Norwich, VT. This property supports local agriculture, education, scientific research, and multi-use recreational trails. Enjoy the views of our rural countryside as you climb into the forest, or find quiet and solitude as you wander the miles of singletrack trails through the woods. The trails on this property connect with Norwich’s Parcel 5 trails, and the Blue Ribbon Connector trail.

Brookmead Conservation Area has five miles of wooded trails suitable for hiking, mountain biking, trail running, cross country skiing, and snowshoeing. The trail starts from the parking lot on Turnpike Road in Norwich and heads west uphill through the farm fields and across the powerline right of way into the woods. The trail network boasts many vernal pools, forest types, and a remote cabin with a working outhouse.

Trail users please be aware that Brookmead Conservation Area includes land in active farm use. There may be young cattle in the pastures. Do not block roads and gates. Stay away from and do not touch fences – they are likely electrified – and do not enter pastures. If you visit Brookmead with your dog, please keep it leashed until you are above the powerline right of way and beyond any farm fields.

From Dan & Whit’s General Store on Main Street, go north on Main Street .5 miles to a left on Turnpike Road. Brookmead Conservation Area is about 2 miles on the left. It shares driveway access with the Norwich Farm Creamery. Bear left after entering and follow the drive around to the entrance to our parking area and kiosk. 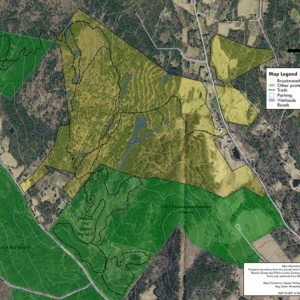 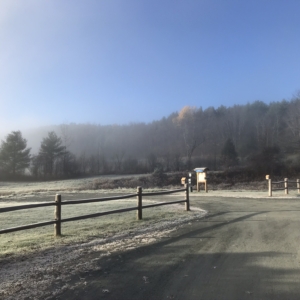 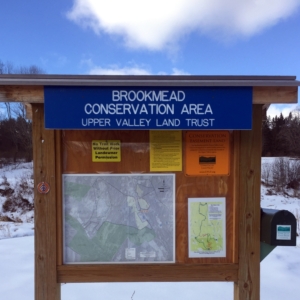 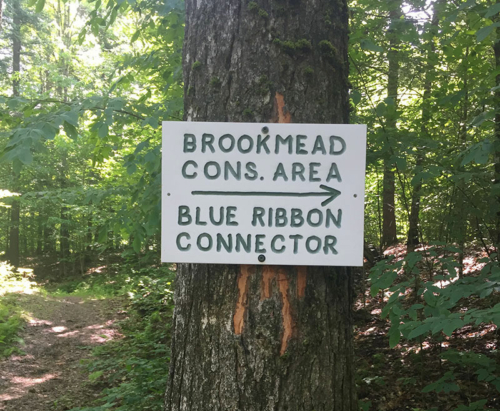 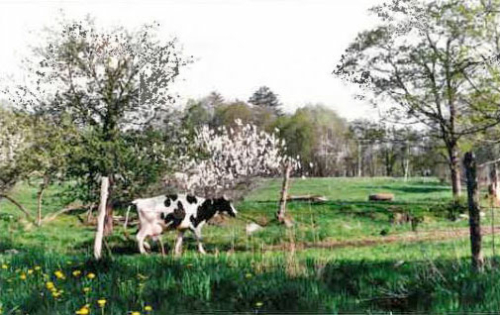 The Story of Brookmead Conservation Area

In 1995, Dale and Marlene Somerville donated a conservation easement to protect 18 acres of beautiful and productive hayfield. The conserved land was part of a 157-acre farm. For most of the 20th century, the Somerville family had made their living from harvesting the surrounding fields and pastures for their cattle who turned the grasses and grains into milk. By the mid 1990’s, Brookmead Farm was the last dairy farm shipping milk in Norwich.

As Dale and Marlene reached semi-retirement and prepared for the sale of the farm, they and their neighbors came together to talk about agriculture, land conservation and the future of farming and their community. Neighbors led a fundraising effort to pay for the legal and survey costs to conserve the 18 acres.

The next owner, Andrew Sigler, bought more woodland. He also reconfigured the farmstead and built new barns to breed Holstein show cows there. After he discontinued the operation, he donated the property to Vermont Technical College in 2015 and UVLT bought most of the farmland and forestland. Norwich residents and the Norwich Conservation Commission contributed to support UVLT’s purchase.

The Brookmead food pantry garden was established in the summer of 2019 and has grown each year since.  Last year the Brookmead garden produced 4,500 lbs of food – everything from lettuce to potatoes – which was donated to our partner Willing Hands to be distributed throughout the Upper Valley. 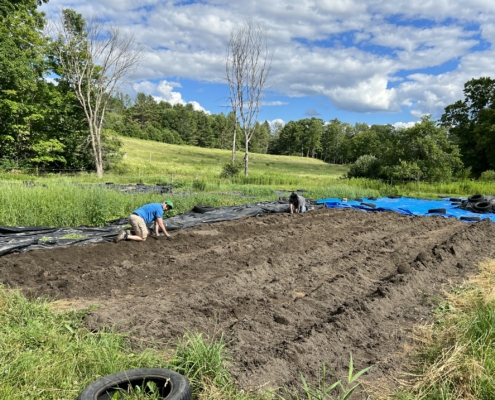 Can YOU help us reach the Pinnacle and get to 50?!

Today we are kicking off our New Member Initiative, and hope to welcome 50 NEW donors to the UVLT giving family before the end of 2022.

New or not, in celebration of Giving Tuesday, we invite everyone in our community to honor your commitment to conservation with a gift to UVLT . All donations are 100% tax-deductible. Unable to make a financial contribution? No problem! There are many other ways to give. Consider volunteering, participating in events, and/or encourage those around you to get involved. It takes a village to preserve our lands!

Today we give our THANKS.

The end of the harvest season offers us a moment of pause, to reflect on nature's bounty which gives us so much in all seasons. Many people have belonged to this land over the arc of time, and it is this sustaining relationship with our lands, with Earth, we offer our deepest thanks. Sending all those who engage with our lands gratitude today and every day.

Over the river and TO the woods!

Last month the stewardship team held a workday at Up on the Hill in Charlestown with a group of volunteers from Hypertherm (part of our Employer-Sponsored Service program) to buck up firewood for UVLT's NEW firewood assistance program in NH.

To learn more, check out today's blog about this initiative, featuring some fun facts and wood heating safety resources.