I took the opportunity to greet November in the field with UVLT Conservation Mapping and Field Specialist, Amber Boland. On Monday, November 1st, Amber and I headed to the village of Strafford, VT to work on the baseline documentation report (BDR) for a parcel of land in the middle stages of conservation. In order for UVLT to hold a conservation easement on a piece of land, a BDR must be created, detailing specific features of the property, such as boundary lines and natural resource value. Once the easement is in place, the BDR is the tool that will guide the stewardship staff in their annual monitoring visits to the parcel. This means that an important aspect of Amberâ€™s job is to accurately describe the land, which can only be done with her feet on the ground!

This particular property is a combination of several tracts of land on both sides of the road and including many a hilltop. Our goal for the day was to circumvent as many of the individual tracts as we had time for, paying particular attention to the corners. Amber keeps a record of what she sees by marking each boundary corner with a GPS point, a photo, and a brief description.Â  We began the day by crunching through frosted leaves with traces of snow from the night before, over the icy cold brook, and straight up the hillside to the property line. Although at times the sun fought its way through the trees, the gusts of snow flurries kept us moving to stay warm.

By mid-morning we moved on to tract number two. Unlike the first tract, which was covered in forest, tract number two is a pasture for a herd of cattle. Our steep accent began in the trees, taking care to step around various sizes of cow patties and move low hanging branches out of our path. Up, and up we went, closer and closer to the tree line. When we finally left the forest we found ourselves in a recently grazed open field.Â  Keeping an eye out for four legged neighbors, we continued with heavy steps and labored breathing to the crest of the hill. The sight of rolling pasture gave way to heavily wooded forest with hazy blue mountains in the distance, making the climb well worth my tired legs. Itâ€™s not every day that one gets to take in the magnificence of nature and call it work . 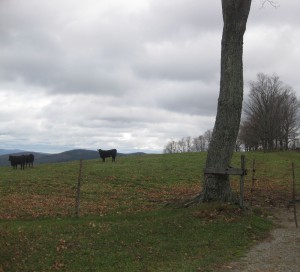 We finally ran into the herd more than halfway around tract number two. Â We decided not to take a chance and turned back toward the other boundary line. This involved shimmying back under the barbed wire fence from whence we came, taking care not to get snagged. Making our way across the road, we passed an old stone foundation and wondered what would possess someone that long ago to build so far outside of town. Perhaps it was the babbling stream that ran nearby, or the breathtaking view of the mountains afar, but whatever the reason, weâ€™re not the first to think this place is special.

By mid-afternoon Amber and I had recorded the boundary lines of three separate tracts, totaling almost 200 acres, and had been up and down many a steep hillside, through forests of pine, hemlock, and beech, traversed pastures with steaming landmines, and braved howling winds and spitting snow. In total, we hiked approximately 6.5 miles all in the name of land conservation. Amberâ€™s fieldwork means that UVLT can move forward with the conservation easement and then a prominent hill and historic farmland above the village of Strafford will forever be protected.