It is 7:30am sharp on Friday July 15th and the back parking lot of a nondescript building along Route 5 in Norwich is full of vehicles, people, and laughter. The associates of Hypertherm, a Hanover, NH based manufacturer, have arrived to begin their 8 hour volunteer day with the Upper Valley Land Trust. The company gives their associates 16 hours of paid time each year to participate in local community service activities. These days fit in with Hyperthermâ€™s commitment and mission to support environmental stewardship and community engagement. 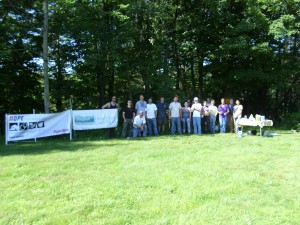 Today, 19 associates gather around UVLT Stewardship Director, Pete Helm, as he gives a brief lesson on invasive plant species. A plant identified by its smooth leaves, speckled bark, and, at times, blue berries. Pete explains that Buckthorn has several advantages over native plants. The most effective seems to be its inclination to â€˜green-upâ€™ quickly in the spring thus beginning photosynthesis and growth much earlier than its native neighbors. On this 2.5 acre property owned by UVLT, Buckthorn has invaded the understory making it impossible to walk through. The impressive density is a good illustration of just how hard it is for native species to propagate their own seedlings when Buckthorn is part of the habitat.

In addition to its growth advantage, Buckthornâ€™s berries are nutritionally poor. To represent the dangers of this, Pete uses a powerful example: migratory birds beginning their journey choose to land on a patch of Buckthorn, filling up on its berries before striking out on in their long flight. Soon after they leave, however, the birds will face a big problem. In Peteâ€™s words, â€œlike a person eating cheese puffs before a marathonâ€, the berries fill the birds stomachs but they are not fortified and as their energy runs out they are not able to make it as far as they need to. 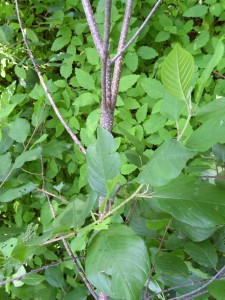 The associates of Hypertherm nod and seem to understand the consequences a scenario such this could have upon a species. Motivated to prevent such a dire event the crews get started! There is ripping and tugging, pulling and pushing. Some use their hands while others have to resort to medieval looking tools to lever the larger shrubs from the ground. As the piles grow higher, one Hypertherm associate reflects that the opportunity has more to it than face value. True it gives the company a chance to help their community but it also brings associates together who would not see or interact with each other during a normal work day. Here are associates from the marketing, manufacturing, engineering and management team all working together to enrich their community.

Hypertherm designs and manufactures plasma cutters and their technology and products are known worldwide. This is some pretty hefty machinery that is used in a variety of industries such as ship building, manufacturing, and automotive repair. One might not think heavy duty industrial manufacturers would want to be in the woods all day pulling stubborn invasive plants but the attitude was positive and people enjoyed it. Despite some minor falls and one nasty run in with a waspâ€™s nest, the crews were able to remove approximately 25,500 square feet of Buckthorn plus an additional small patch of mixed invasives which included Buckthorn along with European Honeysuckle â€¦. pretty cool for folks who build tools that use, in their words, controlled lightning to cut metal! 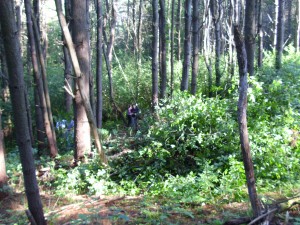 Hypertherm plans on spending their second 8 hour volunteer day with UVLT on July 29th to continue the good work. This is their second year working with UVLT and we hope to continue this partnership for many more years to come. If you know a group of people whoâ€™d like to help us with this or another project, contact us!

Trail Transformations: Volunteers Get to Know Zebedee and Beyond

Beautiful Places, Off-trail Hiking… Learn How You Can Help UVLT

Open House Honors Local Land Stewards
Pedaling for a Healthy FutureSunday Stroll: Have Some Fun & Do Your Body Some Good!
Scroll to top