In 1965, Connecticut residents Edmund and Elizabeth Speer purchased property in Corinth known as the “Andre Place,” an old cape, pasture land and woods at the end of Coppermine Road. Over the course of the next thirty years, the 60-acre hill farmÂ was broken into smaller pieces. In the 1980’s one section of the property was slated for a seven lot subdivision, the farmhouse was sold with about 10 acres and a 10-acre lot was given to the Connecticut River Watershed Council, but the Speers retained the timber rights. 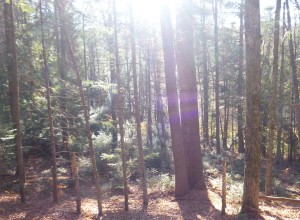 Twenty years later, the parcels began to come back together. Â The Speers donated to UVLT Â the land previously approved for subdivision, but never developed. UVLT conserved it and sold it to the owners of the old farmhouse, Richard and Anne Rosten. In 2008, Elizabeth Speer donated an 8-acre lot, which UVLT conserved and sold to a neighbor. At the same time, she gave UVLT the timber rights she’d been holding. And then last week, in a unique three-way partnership, the Connecticut River Watershed Council, UVLT and the Rostens rejoined the timber rights to the final piece of land and conserved the last portion of the Speer’s holdings. In total, 52 acres of the former Andre Place are now conserved, including pasture, forested hillside, wetlands and frontage on small streams. 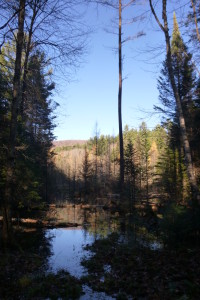 The newly conserved land is gently sloping with a western aspect down to a wetland that is the site of an active beaver colony. The forest is dominated by conifers including balsam fir, red spruce and eastern hemlock.

UVLT has conserved 17 properties and over 2300 acres in Corinth. Abutting to the east of the Speer property, is the 94-acre FX Shea Town Forest, conserved by Sue Shea and donated to the town in honor of her late husband Frank.

Celebrating a Communityâ€™s Forest in Corinth