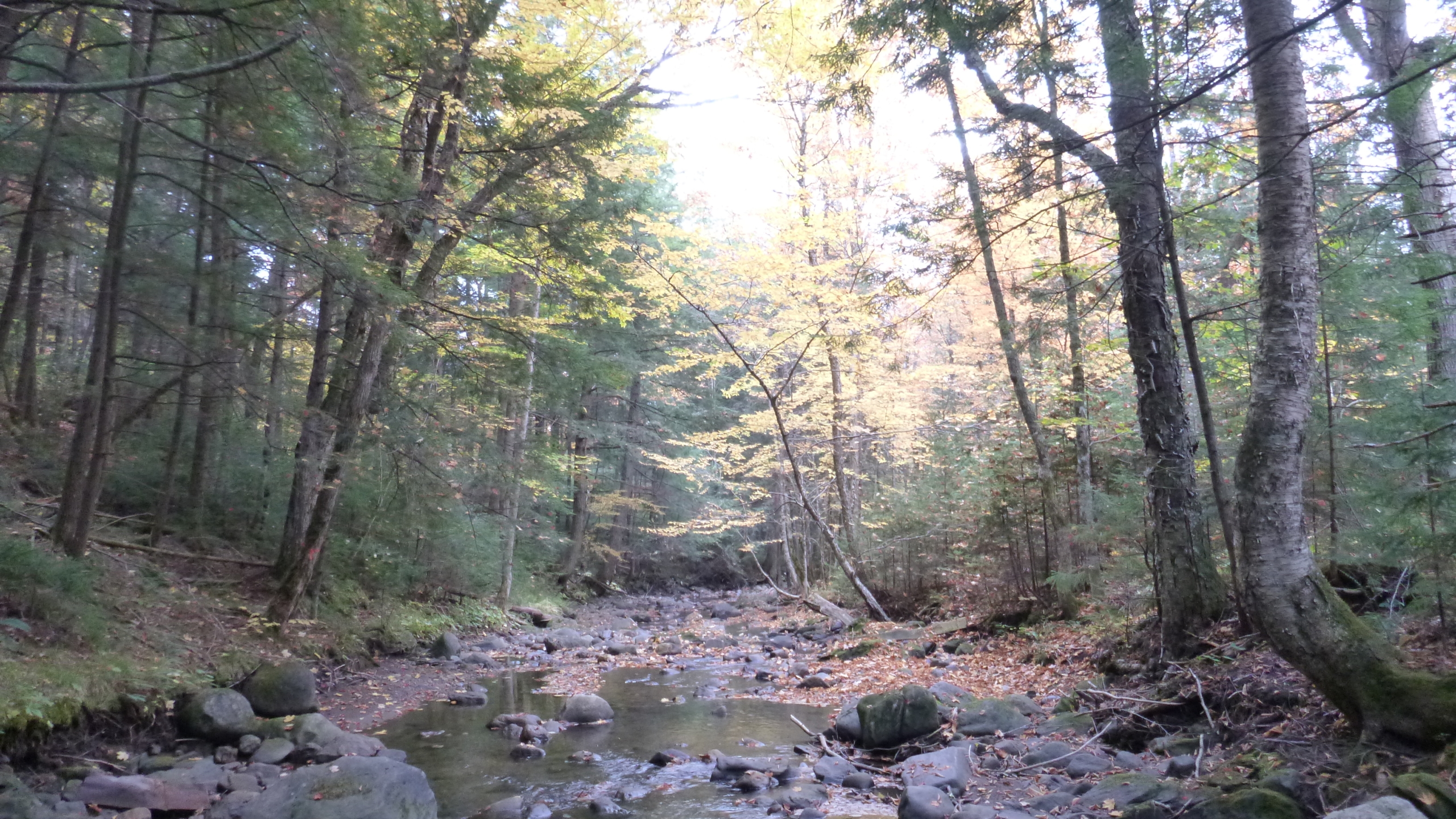 Views across the rolling hayfields and pasture on the 346 acre property on Johnson Road in Corinth, conserved in 2008 by UVLT and landowner Second Growth Holdings, LLC.

This week the Upper Valley Land Trust (UVLT) and landowner Second Growth Holdings, LLC, signed documents to conserve 79 acres of open space that extends a corridor of permanently protected land and provides wildlife habitat and important buffers to Meadow Brook in Corinth. What made this project even more exciting was its place at the culmination of a multi-year series of conservation projects and partnership between the landowner, UVLT, and a local initiative called the Orange County Headwaters Project (OCHP).

This current effort began in 2008 when UVLT and OCHP conserved a large 346 acre property includingÂ working forest, rolling pastures, state-significant wetland, and important water features along Cookeville Brook with a grant from the Upper Connecticut River Mitigation & Enhancement Fund. Tom & Becky Loftus have since purchased the property from Second Growth Holdings, the initial conservation owner, as supporting acreage for their home farm in Cookeville; the fields now help nourish their dairy herd that produces the award-winning Blythedale Farm cheeses.

With funding remaining after this initial project, UVLT and OCHP sought other properties with similar conservation values â€“ particularly the important water resources â€“ and were successful in identifying multiple candidates for conservation.

UVLT purchased a conservation easement from Judith Taylor to conserve her 77 acres of woodland and wetland in the Ravenwood area of West Corinth two years ago. The Taylor property shares boundaries and a riparian connection to the original Second Growth Holdings property. Earlier this year, UVLT purchased another conservation easement from Second Growth Holdings on 230 acres of working woodland in southern Corinth. These forested slopes rise from nearly a half mile of frontage along Meadow Brook, a cold fast-flowing stream that cascades toward the South Branch of the Waits River.

Now, in a final phase with the original grant funding, UVLT has purchased a conservation easement from Second Growth Holdings that protects another 79 acres with an additional half mile of frontage on Meadow Brook.Â  Generously sold at a price lower than the appraised value, this easement serves to extend this corridor of conserved land from Chelsea Road to Hurricane Ridge and provide important forested buffers to both banks of the brook.

In sum, 732 acres have been conserved in Corinth through these continued efforts by UVLT and locals in the community, the partnership with the grant funder, and the commitment by these landowners. The conservation of these properties will ensure that 3.25 miles of headwater brooks flowing toward the Connecticut River remain healthy habitats for fish and fishermen, and 74 acres of wetlands will maintain their functions to improve the health of these water resources in our region.Â  The landowners will continue to manage the forests, harvesting timber selectively and sustainably, with care toward preserving the important natural resources, water quality, and wildlife diversity that these working lands provide to us all.

You can find a photo gallery of the OCHP projects below – click any photo to enlarge.

Winter wetland scene: This is a 64 acre portion of a 90-acre Class II state significant wetland on the Second Growth Holdings property off of Johnson Road.

A cascade sparkles through a bedrock channel on UVLT-conserved land, making its way to Meadow Brook.

Landowner Judith Taylor and her daughter Sara Ascher proudly hold signs that will be displayed on the familyâ€™s 77 acre property on Beaver Brook Road in West Corinth. Over 8 acres of healthy wetlands were conserved within their forests on the property that shares boundaries with other UVLT-conserved land.

Meadow Brook at low water levels in fall 2014. Two conservation easements sold to UVLT by Second Growth Holdings have conserved over 1 mile of stream banks and over 310 acres of forests and uplands buffering this water resource.

Summer view across the conserved wetlands on Judith Taylorâ€™s â€œRavenwoodâ€ property, conserved by UVLT in 2012.

Signs displayed on the newly-conserved land owned and managed by Second Growth Holdings in southern Corinth.

Summer view across the Second Growth Holdings property located off of Chelsea Road in Corinth. The forested hillside (230 acres) was conserved in June 2013. The fields and additional forests (79 acres) were conserved on October 7, 2014.

Meadow Brook in southern Corinth is a cold fast-flowing stream that cascades toward the South Branch of the Waits River. Two UVLT conservation easements now protect over a mile of riparian buffers along this waterway. This view from 2012 shows woody debris left from Tropical Storm Irene â€“ protecting a healthy riparian corridor can slow and ease the floodwaters of future storms.

Summer view of fields along Bliss Place and the forested slopes of Hurricane Ridge â€“ all conserved by UVLT and landowner Second Growth Holdings LLC in 2014.

Fall views across newly conserved fields and forests in southern Corinth. The vibrancy of the land is palpable.

This bear beech tree is a prominent signpost on the conserved land as well â€“ promoting healthy habitats connected in perpetuity for the far-roaming creatures of our communities.

Summer light touches the mosses on the fertile floor of the conserved Ravenwood property.

These conservation success stories were supported by a grant from the Upper Connecticut River Mitigation and Enhancement Fund, administered by the NH Charitable Foundation.Â  The Upper Valley Land Trust, a regional land conservancy serving 45 towns in Vermont and New Hampshire since 1986, works with willing landowners and our communities to protect special places and important natural resources for the future.Â  UVLT has now conserved 44,845 acres of land in the Upper Valley.

Together Again in Corinth

Celebrating a Communityâ€™s Forest in Corinth