Draft animal power has a long history of use in agriculture and forestry. Oxen have been used for hundreds of years and draft horses became popular in late 1800â€™s for work pulling all sorts of vehicles like milk wagons, carriages, fire engines, and street cars. They may have been most important as a part of small to medium sized family farms until the 1940â€™s when tractors and other machinery became popular. However, in the United States there has been a resurgence in the popularity of draft power over the last 40 years (Bryant). Environmentally conscious land owners may decide that using draft power best suits their goals of conserving resources, battling climate change, and protecting habitat. The owners of Fern Hill, a conserved 50 acre property in Cornish, NH are one example.

Peggy Ogilvy, Lucy Heath McLellan, Terry Heath, and Sarah Heath inherited the family property from their mother, Carol Quimby Heath two years ago. They have been managing the property with the anticipation of a modest timber harvest. The land boasts beautiful views of Mount Ascutney, a small summer house, and 44 acres of mixed forestland with a public access trail. Peggy remembers when the property was logged in the past â€“ the last time in the 1980â€™s- when the land belonged to her Grandfather Arthur Quimby. â€œ I still recall his joy while we watched the oxen team majestically pull huge trees out of the clearing. Because of his appreciation for the oxen team he hired for that particular logging project, our family was quite interested in hiring a horse logging companyâ€¦The whole project was low impact and quite nostalgic.â€ 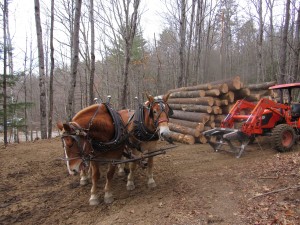 (Burt and Jim at the log landing of Fern Hill)

The family contracted with Bruce Streeter from Orford, NH to do the logging job. It was just in time too â€“ several heavy rain and wind storms over the summer had felled many trees on the property, including multiple trees down over the trail. In an interview with â€œNew Hampshire Mapleâ€ Bruce explained that he â€œgets some land owners who request having horses instead of a machine, because itâ€™s a much lower impact. Itâ€™s not as profitable. It takes longer to skid the wood out.â€ This was true forÂ the Heath Siblings too but they determined that the tradeoff of less profit in exchange for a less impactful logging job was a good fit for them.

I visited the property for an annual monitoring visit to see the horses in action and check out the area that had been logged. I met Dan Hertzler, Peggy’s Partner and Lucyâ€™s daughter, Quinby McLellan on a cold November afternoon for the walk. Bruce was out that day with Burt and Jim, his two 1850 pound Belgian draft horses. As we approached the woods road that doubles as a trail we could hear them coming down the hill, dragging a single log between them down to the landing below. The horses and Bruce had been working for a few weeks dragging logs out of the woods this way. 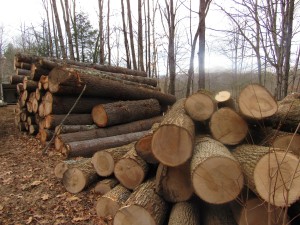 (The logs pictures took several weeks to cut and haul to the log landing. Using draft power can be time consuming)

As Bruce said, there are downsidesâ€“ the Heath family did receive less income from the harvest than if they had chosen to conventionally log, and they could only log a section of their property that wasnâ€™t too steep for the horses. Horse logging can also be very slow and sometimes inefficient, making a smaller job take a long time. 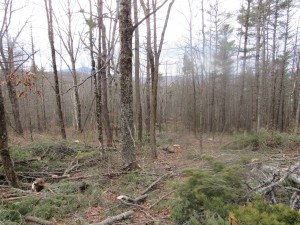 (The logged area after trees were cut. Impact to the forest is less severe when using draft power and selective cutting.)

However, there are also advantages to horse logging. Owners of smaller woodlots may have a harder time getting machinery onto the property to do the logging. Using horse power minimizes the impact to the forest because the width of skid trails can be narrower and horseâ€™s hooves donâ€™t compact the soil as much as large equipment does. The forest returns to looking like it did before the logging more quickly, which is helpful when managing for wildlife habitat. Sometimes, economics can work in favor of a landowner with a small lot if the set up costs for conventional equipment are too large. There may also be aesthetic reasons â€“ horses are not as loud, they donâ€™t smell like fuel, and they can be more reliable than a machine. As fans of horse logging say, â€œthey always start when itâ€™s cold,â€ no fossil fuels required. 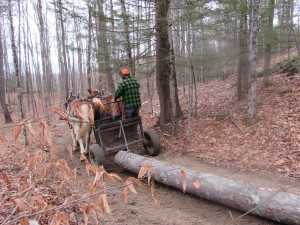 A Conservation Corridor Grows in Cornish

Haverhill Couple Conserves Farm: “You have to treat your land right&#...
Scroll to top