Last year I visited the inaugural session of the Art in the Wild camp interested to see just exactly what happens on a piece of land after it is conserved for public enjoyment. Is it used? Is it enjoyed or forgotten? What are the impacts? What would todayâ€™s modern kids, with all of their technology, think about spending time outdoors or in a studio â€“ all with no digital attention-grabbers? Well, I quickly discovered exactly what happens to the people who visit the land and how meaningful an impact time outdoors can have upon them. You can read about it here.

This year my eagerness to return was not matched by my attendance; I was only able to attend the last day of camp but, in a way, this is what was meant to happen. 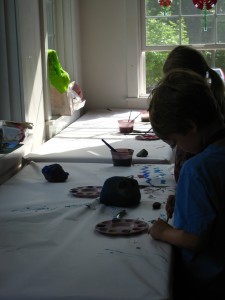 Art in the Wild campers deep in creative concentration.

When I arrived during check-in the campers were already bent to the call of their creations or gleefully scrabbling through the door shedding backpack, lunchbox, and a stray shoe or two in their hurry to join in. The day before, I was told, they had been on an adventure to the river and collected rocks. This morning was when they could begin painting them. Â Heavy paper was rolled across the surface of all the tables so that creativity didnâ€™t have to stop at the edge of the object; it could spill over the â€˜linesâ€™â€“ which it quite often did in rambling tendrils. An extensive array of brushes and palettes, tools and paint colors clustered around each child as meteors suspended in the planetary pull of their creativity. Each child centered within their fan of objects was bringing, with great focus and care, the next inhabitant of their imagination to life.

This humming, quiet energy was very different than the boisterous bouncing that went on during my mid-week visit the year before. Perhaps it was just the difference in energy between two different groups of children on two different days. However, it seemed to me that the extra time had also brought with it a more centered excitement. After four days of supported â€“ but not dictated – environmental and artistic discovery, these explorers were happily choosing to continue on unprompted.

This last day was also a big day because VINS was bringing some live birds, a falcon and owl, for the campers to observe and draw! It was a chance for both age sets to come together for one last experience as a whole group. Rocks set aside to dry; the first step closer to the live birds was a practice drawing session. Reference books came out and pencils got to work. Next was a brief reminder about how the birds could be scared by loud noises and sudden movements. Then, finally, the birds arrived and the excited energy notched a bit higher. For 24 kids ranging in age from 7 to 12 I was impressed by the level of self-containment they maintained. 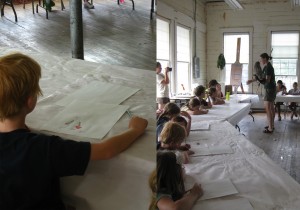 A camper draws the red-tailed hawk as a VINS staff members answers questions.

Unfortunately, the owl did nothing to help matters, hooting mysteriously from inside its carrier and eliciting excited squeaks and scuffles from the audience. When the time finally came to pull the birds out of their cages the room hushed with anticipation, and then in one smooth swoop the birds came into view. The time passed very quickly; questions were answered and sketches came to life. Before we knew it the birds were headed back home, drawings were on the wall, and it was on to the next part of the day â€“ outdoor games on the protected property.

We separated back into age groups and I accompanied the older kids to the Jackson Conservation Area , a quick 10 minute walk from AVAâ€™s front door. Once the trees had gathered around us and blanketed the sounds of construction from Bank Street we stopped walking. The game was Camouflage and the object was to use the environment to hide you from whoever was â€˜Itâ€. Every time â€˜Itâ€™ covered their eyes and counted, the hiders had to move closer. Then â€˜Itâ€™ could look, but not move, and call out when they saw someone. The kids were encouraged to think about different ways to hide; could they use the color of their clothes to blend in? Would bending their bodies to look like a fallen tree limb provide enough disguise? And then the games began. Soon the woods were filled with the sounds of children playing, exploring, interacting; it was the campâ€™s â€˜Golden Ruleâ€™ come to life â€“ have fun. 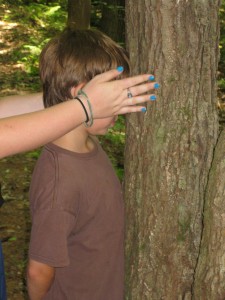 No peeking when you’re ‘It’ during a game of Camouflage!

I watched it all with a smile on my face, listening to what each child had to tell me about the game and being outside. I had been asking them throughout the day: Did they like going to the woods? What was best about it? Would the camp be as fun without a place like this to play?

The answers were largely consistent: the woods were cool but not the bug bites, they were pretty sure the camp would still be fun but not AS fun if they didnâ€™t get to go play outdoors, and their favorite things varied. Each had their own special moments theyâ€™d carry away with them.

It was on the walk back, however, that I got an answer that I wasnâ€™t expecting. Its author was a 9 or 10 year old boy who had been bumped up with the older campers because their pace and learning level suited him better. This group of kids was quite harmonious. They were all friendly, engaging, distractible, and curious all at the same time. In short, he fit in well. I am going to quote with as much accuracy as possible what his answer was to my question, â€œWhat do you like best about going to the woods?â€

We walked a bit further when he began again,

â€œIsnâ€™t it amazing that we have life?! Like we exist and we have the ability to hearâ€¦how do we know that we are hearing it? We are amazing beingsâ€¦and you know, youâ€™re hearing, and seeing, and smelling andâ€¦â€¦â€¦â€¦â€¦â€¦â€¦.â€¦..at exactly the right momentâ€¦..itâ€™s being alive.â€

This boy, it turned out, was from New York City. 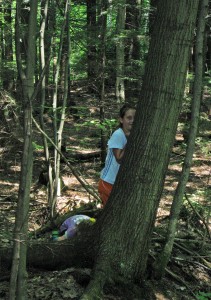 A smile of delight from a ‘camouflaged’ camper.

Before I departed I stood and spoke with AVA councilor, and my newfound friend from last yearâ€™s program, Murray Ngoima about what this boy had said. After a time she smiled, looking across the room at a girl who was quietly and beautifully crafting a bear out of clay next to a boy who was smashing, with great gusto, over and over his stick figure with a clay meteor. Â She said,

â€œIf you walk into a room of noise, stop and listen. Think to yourself, what is that noise?â€

And I am fairly certain that what I heard was the next generation of land stewards seeing, feeling, and sharing what fun it is to go outside.

Art in the Wild is a unique program for children to explore art and experience nature right in the City of Lebanon. Hosted by the AVA Gallery and VINSÂ in partnership with UVLT we hope to offer this program again next season. The Jackson Conservation Area represents just one opportunity to get out and enjoy the lands of the Upper Valley. More opportunities do exist, so get out there and enjoy them! You never know what you might get from it.

Join Us for Dec. 20 Conservation Easement Signing and Celebration