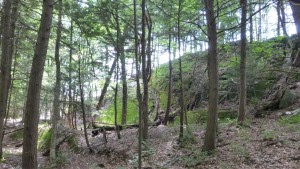 UVLT has acquired a significant ecological area,Â located off of NH Route 120 at the northern edge of Lebanon.Â This forested tract is a critical link to large forest blocks to the north and south. UVLT’s acquisition will benefit wildlife and help sustain populations of birds, mammals, and amphibians that otherwise would be displaced as more development continues along and near the Route 120 corridor in Hanover and Lebanon. Â UVLT owns adjacent lands to the east and will manage this property with those parcels as a larger conservation area of approximately 357 acres with primary goals of wildlife habitat protection and water quality preservation. Across Route 120 to the south is additional UVLT-conserved land known as Timberwood Wetland. 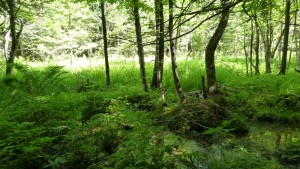 This transaction involved the NH Wetlands Bureau, the Lebanon Conservation Commission and Norwich Partners, developers of a hotel and business park on an adjoining parcel. Our new land atÂ Rix Ledges was beloved by two late conservation champions — Nicole Cormen and John Joline. We are thrilled and proud to take on its stewardship. 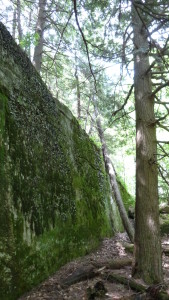 The property is entirely forested. There are two prominent topographic features: Mount Support (elevation 968 ft), located in the western portion of the property, and Rix Ledges (over 1100 ft) which run north-south along the eastern boundary.Â  The basin between these contains headwaters of unnamed streams draining to Mink Brook, in Hanover.Â On the east facing slopes there are some dense stands of hemlock, balsam fir and red spruce which offer winter wildlife cover as well as keeping soils and streams cool during summer months. The ridgelines of Rix Ledges and Mount Support have rich red oak rocky woods, a natural community type important for mast-producing trees that support the variety of wildlife that exist in these unbroken forests.

Lebanon’s 2009 Natural Resources Inventory (NRI) Â documented two primary wildlife corridors running north-south through the property, noting that both areas were â€œhot spotsâ€ with numerous overlapping resources important for supporting diverse wildlife communities.Â  During fieldwork in 2016 these areas had evidence of moose, black bear, deer, coyote, bobcat, turkey, fox, fisher, ruffed grouse and mink as well as small mammals.Â  Various other well-used paths traversed the property, so it is likely that the whole property provides important refuge for wildlife in an increasingly developed part of Lebanon.

UVLT will own and manage the land for long term conservation stewardship, including the goals and requirements of NH’s Department of Environmental Services to protect wetlands and wetland buffers around areasÂ that will serve as mitigation for impacts on adjacent property developed under City and State permits. 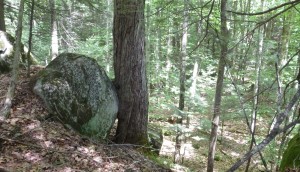 Conserving a Town Forest for Weathersfield

Open House and Hike
Restoration and Research on Ascutney Mountain