Today we were reminded that Thursdays tend to be pretty special days on Thetford Hill.Â  The morning was crisp and bright, and UVLT staff, Pete, Jason, and Sara were on site planning for the upcoming workday on the Linny Levin Trail.Â  Out beyond the wetland, while busy scouting hemlock, we heard a faint chorus of sounds, almost like a faraway flock of birds; as it grew closer, we laughed as the noise grew with eager exclamations and the excited approach of the Thetford Elementary School second-graders! 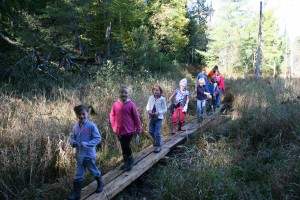 The kids showed up full of energy and full of wonder at the changes to their beloved trail â€“ all good changes, they reported!Â  They really enjoyed the bridges â€“ which will keep their boots less muddy and also protect the plants and animals that live close to the trail.Â  As they neared the wetland overlook and their teachers gave the signal, a hush came over the group and they quietly (relatively!) snuck toward the waterâ€™s edge, hoping to get a glimpse of some animals in the wetland instead of scaring them away. 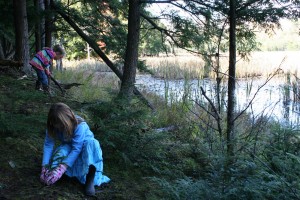 Once gathered together, Jason answered their questions about the new changes to the trail and what is yet to come, and they learned about the helpers who are making it happen, and thanked UVLT (and our volunteers and donors!) many times over, with smiles and stories of their own.Â  As they took time to explore and find their own â€œmagic placesâ€ a youngster named Ethan showed me his spot, carefully covered in mosses and nestled in a pocket of ground with a view over the lilies on the pond.Â  â€œWow, that place does look pretty special,â€ I told him, and as he laid another bit of moss over a rock, he nodded in concentration but then looked up and gave a smile, â€œSure is!â€

Today a group of 20Â heartyÂ folks braved a steady drizzleÂ and chilly tempsÂ to wrap up the work that began a week earlier on the trail at UVLTâ€™s Zebedee Wetlands. Â The trailÂ will be dedicated in memory of Linny Levin later this fall. Â People from Thetford, friends of Linnyâ€™s, a group of four fromÂ Dartmouth College throughÂ the United Wayâ€™s Day of Caring Program, and folks from the Thetford Conservation Commission came out toÂ helpÂ put the finishing touches on the trail in preparation for the dedicationÂ and opening. 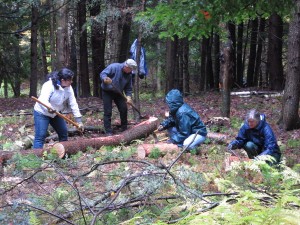 We set more stones , finished a log bridge, made three benches, and did a little more brushing out of the trail in a few sections. Â  Ohâ€¦and we ateÂ reallyÂ well thanks to all the people who contributed goodies to our snack assortment! Huge thanks go to all involved!!

There are still a few things to do out there, like get the kiosk installed, and put up trail markers, butÂ the initial work is almost done. Â The trail, while not officially open and dedicated, is certainly walk-able and we hope you will come outÂ and try the improvements.Â  Let us know what you thinkâ€¦Â and check back in with us (www.UVLT.org)Â to find out theÂ date of theÂ big dedication!Â  The foliage is awesome out there right nowâ€¦please do enjoy it!