Bob Pulaski was a 32 year veteran of the Thetford Conservation Commission, who also served on UVLT’s board as its treasurer in the 90’s.

As Steve Lehman, the current chair of the conservation commission, said during his opening remarks of the dedication, “He was the backbone of the commission and was invaluable to new members, sharing his knowledge of the town and its conserved properties, his wisdom and the example that he set for all of us with his integrity and his modesty.”

Below are UVLT’s President Jeanie McIntyre’s remarks about Bob. The entire dedication can be viewed as a video below. 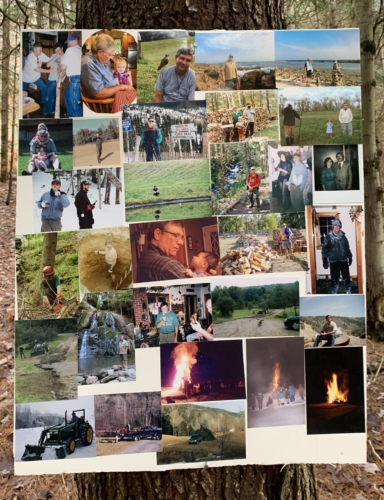 That I can welcome you to gather here, is due to many of you, who like Bob, and with Bob, chose that it would be conserved.  It would be a place of stillness and life and gathering.

These last few days I’ve been thinking about how places hold memories — more, the very essences of people. How maybe, on paper, Zebedee belongs to the Upper Valley Land Trust, but really we each belong to it. And how when you belong to a place, you also sort of belong to the other people who belong to it. And all the people who have ever belonged to it.

It is a kind of melding of human-ness and nature, timeless, transcendent.  An intimate, infinite community.

Bob Pulaski served on UVLT’s Board and was our treasurer. His qualifications were, of course, outstanding. But Bob never put the spotlight on himself or the importance of his role. He was a rock, a warm, strong, quiet-with-joy-and-humor-bubbling-inside, utterly giving and always kind rock. His handiwork was so good you almost didn’t see it, but you could always count on it.

There’s a morning we spent with Charles Hughes, January 1998, sitting at his table, that I will never forget. Bob’s gentleness, his astute questions. Mr. Hughes, was 98, very hard of hearing, and nearly blind. He was re-thinking his estate planning, maybe changing his will to give or bequeath property to the Town for conservation.  Afterward, Bob told me that he’d not had this kind of conversation before and was unsure. But what came through was steady and trustworthy.

Mr. Hughes said before he gave away the land, he wanted to spend one more summer out in his old farmhouse on Poor Farm Road. It was “primitive,” on an unmaintained road, no plumbing. But the meadow outside and apple trees and maples and the beaver pond. Of course you do said Bob, of course. And we drank a glass of water and looked out the windows at winter in Thetford Center village and the three of us imagined summer coming.

A few weeks later, Bob led a group of us on a cross country ski visit to the property.

I am so truly grateful to belong to the community that Bob shaped, to feel his love of places like Zebedee and the Hughes Forest and to know his essence here, now in this place with you.

Trail Updates: A Visit from the Second Grade and a Soggy Saturday’s Work