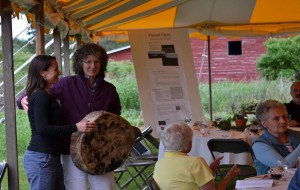 UVLT Mapping and Field Specialist presents Karen Douville with a drum made by Patchen Miller and a friend. The drum is passed on to Karen for the year and stands as a symbol of the award and the spirit for which it is given.

Karen Douville, a member of the Hartford Conservation Commission since 1999 and a co-founder of the nine-town Linking Lands Alliance, received the Patchen Miller Award at the Annual Meeting of the Upper Valley Land Trust (UVLT) on June 5 in Norwich, Vermont.

â€œKaren’s work on conservation, natural heritage protection, environmental education and other community outreach projects is always done with commitment, consideration, humility, dedication, reflection, positivity and an inquisitive nature. Â She provides a shining example of how to do the work,â€ explained Craig Layne, ecologist and Norwich Conservation Commission member.

The Award was established in honor of Patchen Miller, a young man from Hanover who died tragically at the age of 26. â€œPatchen was a student who was more at home outdoors than in a classroom,â€ recalls UVLT President, Jeanie McIntyre, â€œHis power of observation and his joy in the natural world was infectious. He was a fun person to be around, because he was so appreciative of what was around him â€“ and he helped all of us be aware and enjoy it too.Â  We remember his joyous, inquiring spirit annually with this award.â€ 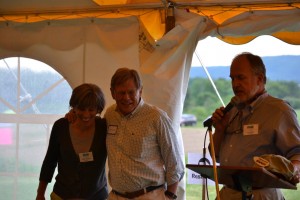 McIntyre says that Karen Douville is deeply committed to keeping the Upper Valley a wonderful place to live for both humans and wildlife. Â â€œThe goal of the Linking Lands Alliance is to reduce the political hurdles and boundaries for protecting wildlife habitat through grassroots outreach and education.Â Karen has been the critical person keeping the Alliance going for more than a decade. Her inquiring spirit, enjoyment in learning, and pleasure in sharing with others have been a key to the successful approach.â€

Brian Walsh, a civic leader, artist and former chair of the Hanover Board of Selectmen, received the Ashley Advocate Award honoring the late Jim Ashley. Bob Wetzel, Chair of UVLTâ€™s Board of Trustees said the award recognizes â€œa person who â€˜wears UVLT on his sleeve and carries UVLT in his heartâ€™ as Jim did. Jim was a UVLT Trustee and a conservation easement donor who never stopped making introductions and bringing new friends to us.â€ Wetzel said that Walshâ€™s introductions have â€œled to new partnerships and bigger ideas, because Brian is deeply committed to increasing UVLTâ€™s capacity to act swiftly and strongly in the pursuit of the best land conservation.â€ 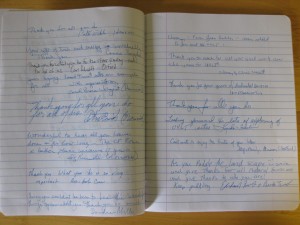 This special edition logbook contains notes of thanks to Robert Kadlec for his volunteer efforts at the Harkdale campsite over the years.

Accepting the award, Walsh urged attendees to contribute funds for land conservation. â€œThe Upper Valley Land Trust is a highly effective organization and very important in the Upper Valley. The value of your gifts is multiplied many times over,â€ he said, â€œbecause land conservation is a permanent investment.â€

Robert Kadlec, of Jaffrey, New Hampshire received the Volunteer Award for his service maintaining UVLTâ€™s campsites for paddlers on the Connecticut River. â€œHe annually opens and closes the sites, regularly cuts and leaves firewood for campers, and paddles for extended overnights on the Connecticut,â€ says McIntyre, â€œLogbooks at the sites he maintains demonstrate the far-reaching impact of his service. There are notes of thanks from area residents as well as families and youth groups from across New England, the mid-Atlantic, far west, and Europe.” 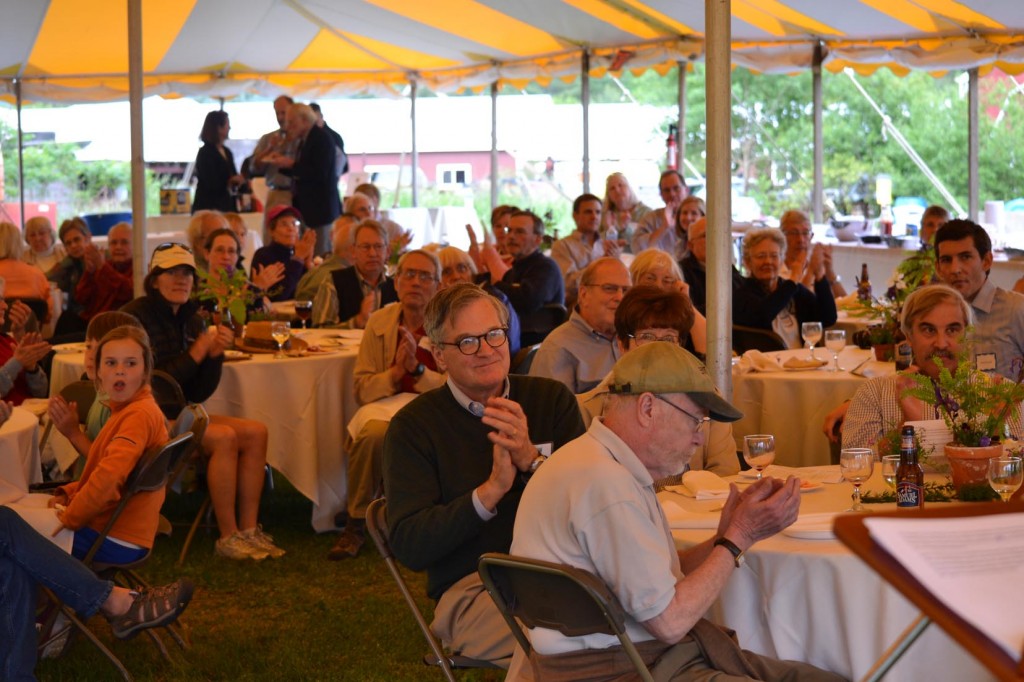 A round of applause for Karen Douville, Brian Walsh, and Robert Kadlec!