While waiting for my eleven year old daughter, Abby, to finish band practice at Thetford Elementary School, a piece of artwork caught my eye. Second grader Mack Briglin has drawn a picture depicting Bill Hill, a place near where Mack lives, which Upper Valley Land Trust holds a conservation easement on. The drawing was part of a wonderful project given to the students by 2nd grade teacher, Regina Bradley.

â€œWrite about a place that is special to youâ€, she told them. 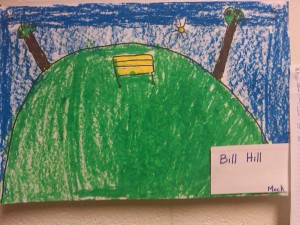 Each child had written a paragraph about their special place and drawn a picture to show readers what their place looked like. The connection each child has to their special place drew me back to my own childhood. My cousins and I would head off through the thin strip of woods behind my grandparentsâ€™ house in Bennington,Vermont, not to the gravel pit that lay beyond the trees, but to some imagined wild desert somewhere. More likely we pretended to be Luke Skywalker wanting to get off his dusty home planet, Tatoine, any way we could. Just like Luke Skywalker, we were looking for adventure. This was my special place. Now, it is a large housing development; the woods and â€˜desertâ€™ are gone. 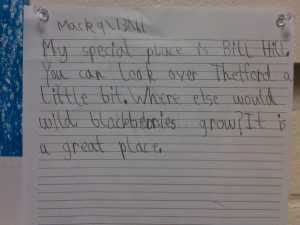 Fortunately, that wonâ€™t happen to Mackâ€™s special place. About 50 years ago, Noel (Ned) Perrin, a former English Professor at Dartmouth College, purchased the farm that included Bill Hill. He fell in love with the farm, and Bill Hill along with it. In his words,

â€œIt all began because of Bill Hill. Bill Hill is a large lump of glacial debris behind the pasture across the road. I own it. Insofar as a thing as small as a human being can own a thing as big as a hill.â€

Ned set about his life as a professor, writer, and â€œsometime farmerâ€; he had a sense of being connected to the land just like the farmers before him. Reclaiming the stone walls and pastures of his farm was just a single part of his commitment to the land. I think he felt he owed it to the people who had cleared the land and made a meager living on it for generations. To honor their endurance Ned reclaimed Bill Hill and the rest of his farm as best he could. Rumor has it that Ned taught some of his graduate level writing courses at the farm. His â€˜classroomâ€™ alongside whichever stonewall he was rebuilding at the time. 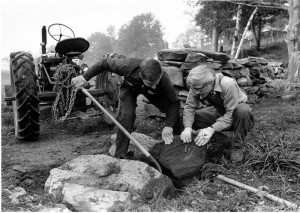 Assisted by friend Ellis Paige, Ned (on right) lays the foundation for one of Bill Hill’s stone walls.

Before he died Ned made sure his spot on the map would continue to be a farm and not chopped into the 44 house lots which zoning would have allowed for at the time. He put a conservation easement on his farm ensuring his â€œSpecial Placeâ€ would remain for others to explore and enjoy, forever.

When I saw Mackâ€™s writing and art, I knew Ned would be quite pleased. His Special Place was inspiring the next generation to write about their Special Place. At the top of Bill Hill, friends placed a plaque to honor Ned inscribed with the line â€œNothing Gold can Stayâ€ from poet Robert Frost. But I wonder; is that true? Because of Nedâ€™s foresight, Mackâ€™s Special Place will be there forever, and generations going forward will discover Bill Hill for themselves. At the end of a passage from his essay â€˜Grooming Bill Hillâ€™ Ned describes the value of reclaiming Bill Hill and its 15 acres of pasture,

â€œIt will be no bad legacy to leave.â€

Looking at Mackâ€™s artwork, I know Nedâ€™s legacy will live on. As Mack says,

â€œWhere else would wild blackberries grow?â€ 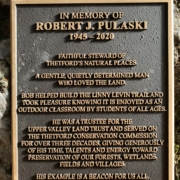 Trail Updates: A Visit from the Second Grade and a Soggy Saturday’s Work

Trail Update: Stones Among the Frost

Pegjack Memorial Forest Dedication
No Pain, No Gain: Hypertherm Puts a Hurtin’ on Invasive SpeciesShe Spoke for the Land – Laurel Letter and the Spirit of Conservation
Scroll to top