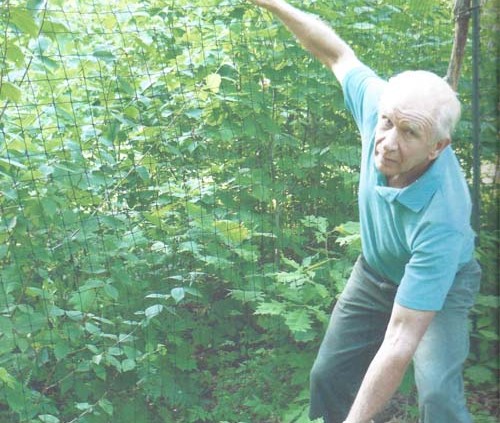 New Hampshire Fish and Game Department (NHFG) is seeking public comment as it finalizes a new ten-year Game Management Plan for New Hampshire. The Plan will set population goals for moose, deer, bear, wild turkey and other game species for the period 2016 through 2025. These population goals will in turn drive hunting seasons and harvest limitations in the various game management areas.

NHFG staff are presenting proposed goals at a series of public meetings this month and next. The deadline to submit written public comment is April 6. The final draft plan will then be presented to the Fish and Game Executive Director and the Fish and Game Commission for final review and approval during the late spring or early summer of 2015. 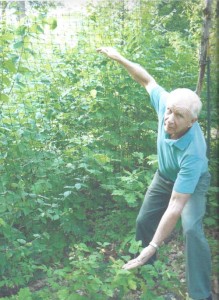 The Game Management Plan has potentially serious implications for New HampshireÂ forests and wildlife habitat because of white-tail deer. Excessive populations of deer are known to have devastating effects on forest regeneration and quality of habitat upon which other species depend. Nevertheless, NHFG estimate of the desired deer population is based on our landscapeâ€™s biological carrying capacity for deer — the amount of suitable habitat for deer. This is unwise. Deer is a particularly adaptive species. The quality of habitat that is sustainable for deer may not be sustainable for other species (plants and animals).

Healthy forests are a vital part of the economy and our quality of life. It is troubling to observe that there are areas in our region where dominance by invasive species like buckthorn is now the norm following timber harvest, and this is changing the calculus of forest stewardship. We could potentially lose the structure of our forests. Interrupting and changing forest cycles introduces greater risk to systems that are already at stress from climate change and fragmentation.

NHFG uses statistical ratios to generate estimates of the deer population based on the amount of deer killed by hunters annually. But increasingly deer are proliferating in fragmented areas where hunting canâ€™t occur because there are too many people. Though these deer are uncounted, they move through the landscape and have significant ecological, economic and human health effects. New Hampshire depends upon hunting to control deer populations, yet there are a declining population of hunters. 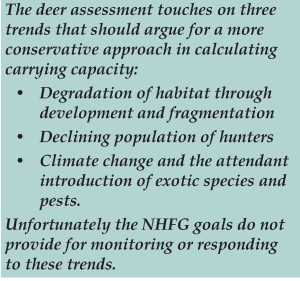 In their species assessment for white-tailed deer, NHFG biologists acknowledge that their proposed population goals are considered to be â€œabove long term conservation levels.â€ They refer to increasing problems and costs with deer populations. Yet, the report concludes that New Hampshire residents (non hunters) prefer high deer populations. We doubt this is true â€“ but if it is, weâ€™d urge a full public discussion about forest health and the role of white-tailed deer.

UVLT will advocate for an approach to game management in New Hampshire that sets population targets based on habitat quality, sustainability and biodiversity. The markers for quality should not be how well deer are doing, but rather the viability of the whole suite of species that are necessary for functional, healthy natural eco-systems.

What do you think? Visit NHFG’s website to learn more about NHFGâ€™s goals and assessments and how you can comment.

Open House and Hike
Neighbors Unite to Protect Wildlife Habitat and Working Forestland
Natural Areas: What Are They, Why Do They Matter, and How Do They Touch Down in the Upper Valley Region?
Naturalist Training Course – Sign Up Now
In Orford, a Conserved Birding Hotspot Gets Help from Beetles
Visit the Conserved Palmer Forest
Protecting Critical Wildlife Habitat in the Upper Valley Region
Naturalist Walk at Hawkride Farm
Norwich Campaign Brings Together Conservation, Recreation, History