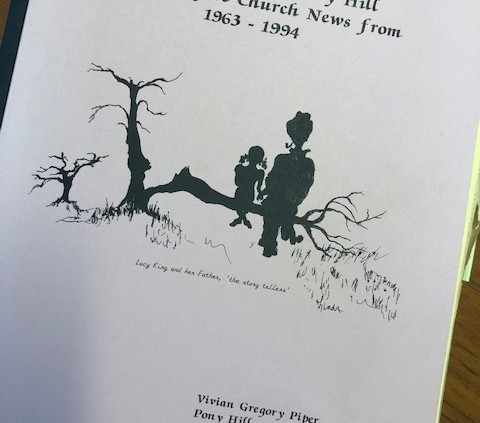 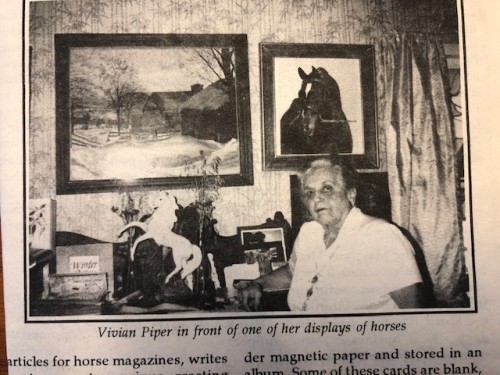 Vivian Piper at home in 1995. Photo courtesy of The Country Chronicle.

Vivian Piper grew up with her four sisters on her father’s farm on River Road in Lyme. From the time she was a young girl, she wrote stories and poems. After marrying Walter Piper, she moved to a small farm, east of Lyme Pinnacle, that had been in his family. There she raised calves for sale, drove the school bus, and brought up her children amidst animals, nature, a strong sense of fun, and plenty of hard work. Beginning in 1963, Vivian contributed essays to the Lyme Church Newsletter. In 1994 she collected and published a collection of these, with illustrations contributed by her daughter Linda. In February 1987, Vivian Piper wrote about Pinnacle:Â

Lofty as hills go, the Pinnacle isnâ€™t very high, but it affords a most magnificent view of the surrounding hills and mountains and valleys all round the small town of Lyme.

From my home it provides a place for the sun to slide in back of and end each day, many times with a sky so glorious it is hard to put into words â€“ I can hear the thunder and rattle of rain and can see the black velvet sky full of flashing electricity. Â The storm seems to hesitate as it comes to the Pinnacle.Â  If I am haying, I am done; if I want to get clothes off the line, I run; or if I want to watch a spectacularly exciting show of nature washing herself, I stay right where I am and enjoy the mighty goings on of my world as it is brought to me over the Pinnacle.

I talked with Pearl Dimick, who is in her ninety-second year and who as child lived where the Hardscrabble Road turns off the Acorn Hill Road.Â  Pearl told me her father, Edwin Dimick always referred to the big hill as the Pinnacle.Â  From her home clear up to the Pinnacle, the land was open, without brush or trees, except for one old growth pine which had claimed soil near the top of the Pinnacle.Â  One night after a bad storm, her father looked to the hill and made the comment that the old sentinel had lost its top.Â  Pearl said the rest of the old tree remained much longer than she could remember.

Pearl remembered also that there were two sets of buildings on the land.Â  One set just as you come onto the opening, up by Harlowâ€™s road.Â  There was a house and a big barn there.Â  And then, as you follow the road to the left, there was another house and big barn.Â  She recalled the names Henry Cutting for the first set of buildings and Frank Cutting for the second set.Â  Pearl went to the Acorn Hill schoolhouse and was taught by a young lady, Ada Cutting, who also lived at the Cutting place.Â  She went to school with children from the Cutting place.Â  The barn on the Henry Cutting buildings burned, and so did the house on the Frank Cutting buildings.

My father, Frank Gregory, bought the Cutting place in the thirties.Â  He needed it for back pasture.Â  At that time it was still mostly clear and was good pasture.Â  We admired the view very much and it was a place for a number of family reunions.Â  During the time of his owning it, people were free to go up through the gate to the Pinnacle whenever they wanted.Â  He only asked that they closed the gate.

Sometime around 1934, David Colburnâ€™s barn burned and my father sold him the remaining big barn.Â  He helped David mark the beams and timbers in the barn and then it was taken down and rebuilt over on David Colburnâ€™s farm where the Swans live now.Â  My father also took the house down and sold the boards to people in Orford, and they used them to build a rather neat little place.

In 1916, Quenhoten (Mr. Thayer) came to Lyme and on Caleb Ward land, he discovered Indian relics where the Iroquois Indians had camped in many summers past.Â  He bought the land.Â  With his love for children and the help of the Indian ghost of the past, he thought he could make this Indian Tribe walk again.Â  And truly he did, in the form of Camp Pinnacle.Â  For twenty-eight years he devoted his life to Newton, himself a long-time camper.Â  The summers of Camp Pinnacle were well over fifty.

During Quenhotenâ€™s time as great chief and founder of the camp, he came to my father and asked if he might build a cabin on the very top of the Pinnacle for the boys.Â  I remember they shook hands and made an agreement (for some reason $2.00 stays in mind).Â  Could it have been rent for the use of the land each year, just to keep it legal?Â  I donâ€™t know.Â  I heard my father caution him about the interest the cattle might take in the cabin and to always be sure the door was shut.Â  He also suggested that Mr. Thayer consider the wind! 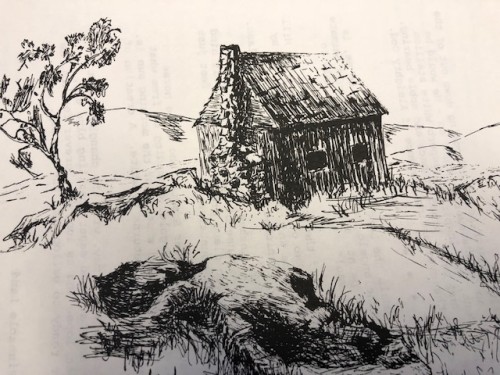 The cabin on Pinnacle. Illustration by Linda Piper.

Mr. Biathrow built the big stone fireplace and the cabin.Â  He drilled holes in to the lodge and put heavy wires on the cabin to keep it from blowing away.Â  For years the tribes of Quenhoten scouted to the top of the Pinnacle, built big fires in the fireplace and carried on ceremonial doings.Â  All that remains in 1987 of cleared land is a small area on the tiptop of the Pinnacle but there is still enough so I can see the big stone fireplace and the chimney â€“ I think of it as a memorial to Mr. Thayer.

When we moved to Pony Hill in 1940, the cabin was still in good condition and our children often used it as an outpost on a trail ride â€“ I suspect they might have chased their Grandfatherâ€™s cattle around a bit before they bedded down for the night.Â  No self-respecting 100 Mile Trail Horse ever left Pony Hill for Maine, Vermont, New Hampshire, North Carolina, or elsewhere, until he had trotted countless times to the top of the Pinnacle.Â  It is still an excellent place to train a trail horse and just out for a pleasure trail ride, â€œLetâ€™s go up over the Pinnacleâ€ is suggested.Â  The Fox Hunt Club, North Country Hounds chase their imaginary fox around the fields of the Cutting place.

The Lyme Pinnacle Snowmobile Club repaired the Pinnacle cabin roof a number of times and fixed the windows and did some general repairs.Â  This height of land is a sort of crossroads meeting place for the snow machines and cookouts and gatherings that were enjoyed there.

In the spring of 1958, the Pinnacle land was host to three hundred Boy Scouts from eighteen communities in Sullivan and Grafton counties.Â  This was the Jamboree for the Boy Scouts of the Mantowa District.Â  The Lyme Boy Scout Troop Number 273 took an active part in this get-together and came home with blue ribbons.Â  District Commissioner Robert Chaffee was Chief of the Camporee and Richard Sanders was one of his able assistants.Â  They came on a Friday morning and left on a Sunday afternoon, richer in feelings, I am sure, from their stay on the Pinnacle land.Â  Where are those boy scouts now who came to the Pinnacle back in 1958?

I donâ€™t know when Mr. Jack Wright came to Lyme and I guess that isnâ€™t important, but the fact that this good man was here does count!Â  Mr. Wright was an artist, teacher and writer along with many other talents.Â  He was also a man with a generous spirit and he saw the beauty of the Pinnacle.Â  He spent hours up there drawing pictures of the ever-changing countryside.

One day, he told me, he was doing something good, he thought, about the view from the Pinnacle and he wanted to include the people who lived in the past and present around this lovely hill.Â  He told the Lyme Historians of his plan after the detailed maps were drawn.Â  They agreed this would be a good way to raise money for the Historians.

Mr. Wright asked Lucy King if she would write about what she saw on the West side of the Pinnacle in his drawing of the various hills and mountains in Vermont.Â  Then he asked me if I would do the same, with what I saw in the drawings on the East side of the Pinnacle from Cookâ€™s City on out toward Smarts Mountain and to Dorchester.Â  My reaction was â€œOh my!â€, but with his encouragement and help from Lucy, it came out just fine.Â  The result was seven pages of material about the Pinnacle, the people around it and the view.

Mr. Wright has passed on, and probably sees from pinnacles much higher than the one here in Lyme â€“ and he leaves us with a written memorial of how this piece of land touched his mind and heart and how he loved the view from the Pinnacle.

The Connecticut River Watershed Council was recently given a conservation easement deed to the summit of the Pinnacle in Lyme.Â  This easement was donated by the present owners of the Pinnacle land, Joe and Helen Darion of Pinnacle Road in Lyme.

To the Darions, the summit of the Pinnacle is also a special place.Â  They bought the land because they thought it was beautiful.Â  Twenty-three acres at the summit cannot be altered in any way.Â  Any future owners of this land will be bound by the restrictions, now a permanent part of the deed.Â  Doing this, the Darions said, made them feel good and I think it is safe to say, what they have done makes those of us who care about the Pinnacle happy too.Â  It was a fine thing to do.

The Pinnacle, lofty, but not too lofty â€“ a hill in touch with the town and the people below it. 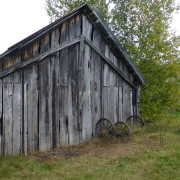