The Plainfield Cider Orchard has been protected through a conservation easement purchased from landowners Steve Wood and J. Peter Williamson in a bargain sale, with support from the New Hampshire Land & Community Heritage Investment Program (LCHIP) [see New Hampshire Partners with Land Trust to Conserve Farms, Natural Areas], the Plainfield Conservation Commission and other members of the community. The easement is held by Upper Valley Land Trust.

UVLT President, Jeanie McIntyre says of the project, â€œIâ€™m glad weâ€™re finishing this project now. It has local and statewide significance and was made possible in a large part through the landownersâ€™ generous bargain sale.â€ 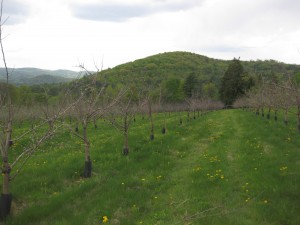 The Plainfield Cider Orchard property contributes 447 acres to an unfragmented 3440 acre forest block in the northern part of Plainfield. This expansive undeveloped property provides habitat and important wildlife corridors for many species. More than 200 acres of the Plainfield Cider Orchard have been identified by the New Hampshire Wildlife Action Plan as Appalachian Oak-Pine forest, a forest community type that is of conservation concern in the state. Large, undeveloped tracts of this forest type are critical to wide-ranging species such as moose and black bear.

UVLTâ€™s Vice President of Conservation, Peg Merrens said at the project closing, â€œThis is the first step in terms of conservation for the neighborhood. Weâ€™ve had some good conversations with other area landowners, and we hope to have more in the future.â€

In addition to protecting important wildlife habitat, the project protects a productive apple orchard that serves the nationally-recognized Farnum Hill Ciders. Stephen Wood and Peter Williamson purchased this property in 1998 as partners in the Plainfield Cider Orchards, LLC. Since then, they have planted more than 3000 apple trees, many of which are rare and heirloom varieties specific to the production of the high quality traditional ciders made by Farnum Hill Ciders. The cidery, owned and operated by Mr. Wood and his wife, Louisa Spencer, is recognized as producing some of the best hard ciders in the United States. Wood says of the project, â€œItâ€™s good to know that I have a chunk of ground thatâ€™s safe for good and all.â€ 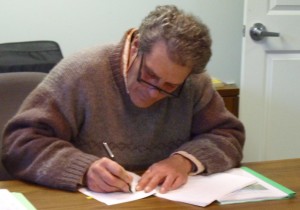 Steve Wood signs documents at the closing of the Plainfield Cider Orchard conservation easement on 12/23.

While the public benefits from the scenic views, wildlife habitat and a productive apple orchard, this conservation easement also ensures that the property will always be available for public recreational enjoyment. The community has historically enjoyed recreating on the Plainfield Cider Orchard property, especially along the discontinued Black Hill Road. Once a primary route between the Connecticut River and Lebanon to Meriden village, it was thrown up by the town of Plainfield in the mid-1900â€™s. The easement allows for low-impact, non-motorized recreation such as hiking, snowshoeing, and cross-country skiing along this historic route, as well as in other parts of the property. Mr. Wood also welcomes hunters, but requests that they receive prior permission, ensuring the safety of owners, workers and visitors, particularly in areas near the orchard and the trails. 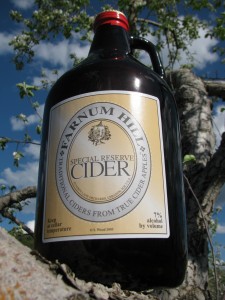 So, as you celebrate with a glass of Farnum Hill Cider this holiday season, know that the land where itâ€™s produced will provide benefits to the Upper Valley forever.

Learn More & Do Your Part to Protect Land Conservation Funding in New Hampshire!

A Place Where Past Is Present
A Conservation Corridor Grows in Cornish New Hampshire Partners with Land Trust to Conserve Farms, Natural Areas
Scroll to top