On Highbridge Road in Lyme, a small parking area was plowed out several weeks ago. Along a singletrack trail through the woods, posted signs came down. “This really is the start of something special,” says Upper Valley Land Trust president, Jeanie McIntyre. “About 100 Lyme families who enjoy the trails and views from Lyme’s Pinnacle have restored access to the land and created a permanent fund for stewardship.”

Over 240 acres and 4.5 miles of trails have been conserved. 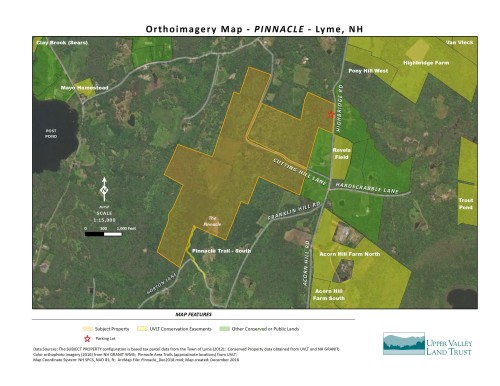 The campaign to establish the Lyme Pinnacle Stewardship Fund has been a new approach for UVLT. Typically conservacies raise money to buy land or protective conservation easements. Often there’s an urgency to secure the land. Then funds to actively manage trails and steward the recreational features are solicited from trail users later. However, land conservancies have found it challenging to raise adequate funds for trail stewardship after the fact. In this case, full funding of the plan for public access was the essential element from the start. Trail users came forward as donors to make it happen. We were able to raise more than $150,000 for the permanent fund.

Summer views from the top of Pinnacle.

Pinnacle isn’t the tallest hill in Lyme, but it might be the most beloved. Located in the center of the town, it can be seen from many locations, and it boasts 360 degree views from the open, flat ledges at the summit. For most of the last century, Pinnacle was accessible via a network of old roads and trails. The landowners allowed people to pass through the fields and woods to the summit. But several years ago, “Posted” and “No Trespassing” signs prevented access on some popular trails. After the death of longtime landowner Hellen Darion last spring, the future of the trails and views at Pinnacle was uncertain.

UVLT was actively engaged in finding new owners for the Darion land and an adjoining property that had been owned by Carol Grumman. Manning Rountree and Kendall Hoyt bought both parcels and  agreed to conserve the land and allow the Upper Valley Land Trust to manage the trails, fields and views, if UVLT established a dedicated, permanent fund for mowing, trail and view maintenance, and creation of a parking area. 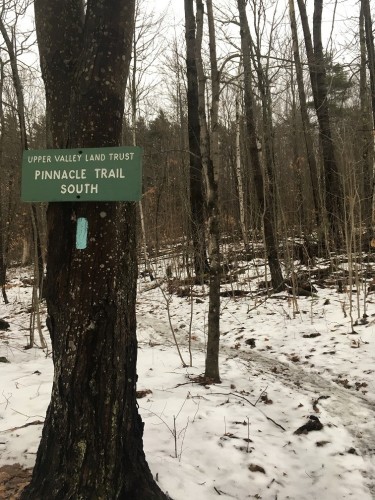 The trail head from Horton Lane to the top of Pinnacle is already blazed and signed.

The fundraising announcement was sent by mail to all Lyme postal addresses just after Thanksgiving asking for contributions to the stewardship fund for the property. In just four weeks, we met the goal, and were able to sign and record the conservation easement just before Christmas, protecting 240 acres of forest, fields, scenic views, and trails.

We had donations from almost 100 households. There are 705 households in Lyme. That shows you how much people really love and appreciate this place. We even got donations from two little girls from Massachusetts who come apple-picking here when they visit their aunt. They sent $30 cash from their allowances. 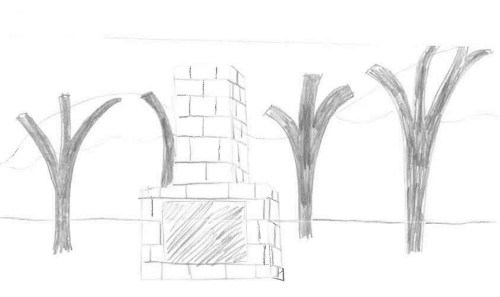 In late December 40 people gathered on a cold day at the top of Pinnacle to celebrate together and thank each other for the gift they had given to one another. Early in the new year, UVLT will be marking boundaries and installing trail signs. 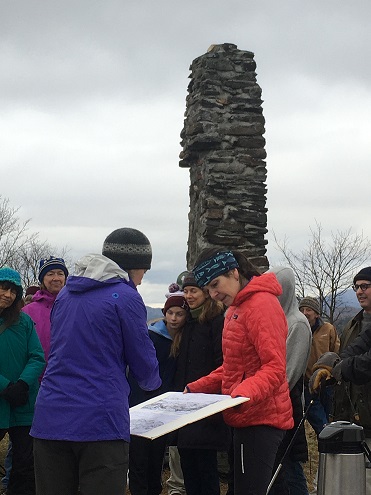 Jeanie McIntyre, President, and Peg Merrens, Vice President of Conservation show the crowd the pen and ink drawings of the panorama from the top of the Pinnacle, drawn in 1966, by Dartmouth geographer and Lyme artist Jack Wright. 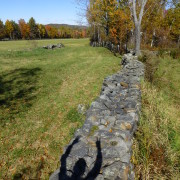 Scenic Beauty to Revel In

A Place of Peace and Quiet: Pout Pond