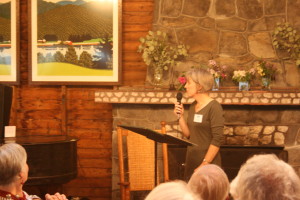 Click above to hear Jeanie McIntyre’s remarks at our Annual Celebration and see pictures from FY 2015.

Mary Holland, Nicole Cormen and Kathy and Lee Larson were honored at our Conservation Celebration and Annual Membership Meeting, June 8th.Â About 150 people gathered at Ohana Camp near Ely Mountain in Thetford for walks and hikes, a meal with UVLT friends, a report on UVLTâ€™s fiscal year 2015 activities and election of Trustees for the coming year.

Mary Holland received the 2015 Patchen Miller Award. The award annually recognizes a person who shares the spirit that we found so remarkable in Patchen Miller, a local naturalist who was killed in 1995 at age 26. Like Patchen, Mary shares an infectious curiosity and sense of adventure and is someone who brings others into engagement with nature.Â  Mary is a naturalist, an observer, a teacher, photographer, and writer whose books, articles, programs and Naturally Curious blogposts just exude joyful attentiveness to the natural world. Mary brings her â€œKnee High Nature Programsâ€ to libraries and schools throughout Vermont and New Hampshire. Her columns appear in the Valley News, Northern Woodlands â€œThe Outside Story,â€ the Vermont Guardian and the Rutland Herald. Because of Mary, thousands of people have paused to take a closer look at something outdoors, have had an â€œahaâ€ moment in nature, have shared that delight with a child, a parent, a friend. This comment posted by a reader of Maryâ€™s website captures the reasons that UVLT selected her as the 2015 Award recipient:

Â Your passion for animals and the natural world really moved me. Iâ€™m always so caught up in my â€œmodern lifeâ€ that I sometimes forget that there is a big, vast world of amazing things just waiting to be discovered and explored. Thank you so much for the reminder!

Myra Ferguson, the 2014 Patchen Miller Award winner passed to Mary a handmade drum, created by Eric Frost, friend of Patchen and son of Ehrhard Frost. Â Eric crafted the drum at a summer camp where Patchen was a counselor. Â Eric, too, died much too early as a young adult. Ehrhard,Â recipient of the Patchen Miller Award in 2011, felt it would be fitting that the drum be passed from recipient to recipient as a way of carrying a part of Patchen forward.

Nicole Cormen received the 2015 Ashley Advocate award, established in honor of Jim Ashley who was a conservation easement donor, a Trustee of the Upper Valley Land Trust for many years, and a champion of UVLTâ€™s work in every way. Jim Ashley was a marvelous host who brought people together to solve problems, to celebrate, to be very generous, to make things happen. Â Nicole Cormen has been connecting people, connecting ideas, connecting places, making connections since she arrived in the Upper Valley with her husband Tom 23 years ago. Her service has been simply extraordinary. Sheâ€™s served on Lebanon Planning Board, represented Lebanon on the Upper Valley Lake Sunapee Regional Planning Commission and Upper Valley Subcommittee of the Connecticut River Joint Commissions. She was a Lebanon Park Ranger, Lebanon Conservation Commissioner and served on the Lebanon City Council for 4 consecutive at-large terms. Sheâ€™s volunteered for the Montshire Museum of Science and for the Lebanon Recreation Dept., where her lifelong love of nature inspired her guided “Wild about Lebanonâ€ series, welcoming people to get outside. Nicole tackles complex issues with diligence and rigor and with creativity, passion and kindness. We suspect that everyone who has ever met Nicole has been invited to join her for a walk, or a snowshoe, a visit to a special place. She gives everyone a chance to see the beauty she does. On behalf of both natural and human communities, Nicole is a terrific ambassador and advocate.

Kathy and Lee Larson were recognized for outstanding volunteer service over two decades. Conservation Director Peg Merrens noted that Kathy Larson has been involved in nearly every facet of land trust work, participating on UVLTâ€™s Lands and Stewardship committees and serving multiple terms as a Trustee. A founding member of an all-volunteer land trust in Granville, OH she brought her knowledge of land trust administration and conservation practices to strengthen UVLT in many ways. Kathy and Lee have monitored countless conservation easements as volunteers over the years, and Lee is one of the few volunteers whose field and mapping skills and knowledge of conservation easement drafting enables him to prepare baseline documentation reports for UVLTâ€™s conservation transactions. As a member (and former Chair) of the Lyme Conservation Commission, Lee has helped landowners find conservation solutions for their properties and has brought partners together to accomplish conservation goals.

UVLT members elected Jeff Bernstein and Jim Zien to three year terms as Trustees. Â Jeff Bernstein is the Managing Director of the law firm of BCK, Law. P.C.Â andÂ practices environmental, energy and technology law in Massachusetts and Vermont. A magna cum laudeÂ graduate of both Brown University, A.B. 1978, and Boston College School of Law, J.D. 1982, he has broadÂ public policy and private sector experience and represents several land trusts in southern New England.Â  HeÂ is a poet in his other life and divides his time between Vermont and Massachusetts along with his wifeÂ Stacey Cushner, an artist and arbitrator. Â Jim Zien recently retired as Executive Director of the Aloha Foundation, which owns and operates summer youth and family camps, wilderness tripping programs and a year-round center for outdoor education, meetings, conferences and retreats. Jim is a graduate of Dartmouth College (â€™69) and received a masterâ€™s degree in real estate planning and development from MIT. Prior to his work at the Aloha Foundation, Jim served for more than a decade as the Director of Community Services & Educational Resource Development at the Boston Childrenâ€™s Museum, developing innovative educational programs for children and their parents. The Aloha Foundation has provided grants in support of the Palmer Forest and Ely Mountain projects in Thetford, and the Hulbert Outdoor Center has been a partner in delivering our naturalist education curriculum.

UVLT President Jeanie McIntyre reported that since the 2014 Annual Meeting, UVLT has conserved 12 more properties encompassing over 1300 acres. The conserved lands include:

Activities to Celebrate Conservation: Join us on June 3rd

Awards and Celebration on Lake Morey 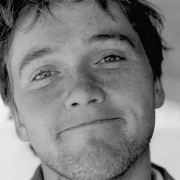